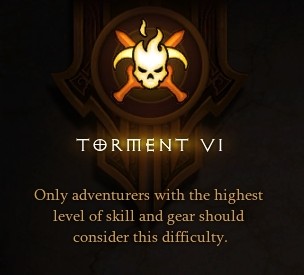 One of the major overhauls in Diablo III Patch 2.0.1 is new Dynamic Difficulty system, which replaces both the old difficulties that went up to Inferno, and the Nephalem Valor system. The toughest difficulty in the new system is Torment, which features a slider increasing the difficulty even further; it goes from Torment I up to the most difficult level of Torment IV. Some of the most powerful new Legendary items in the patch and the Reaper of Souls Expansion can only be found in Torment difficulties. We now have a list of exactly which Legendary items will only be dropped in Torment.

The new Legendary Wand of Woh, last seen in our Loads of Legendaries - Part 2, was brought up in a post -- it is not one of the Torment-only Legendary drops. Nevalistis cleared that up, and provided a nice list of all the Legendaries that will only be available to players who can fight through monsters on the toughest difficulties.

Post by Blizzard (Blue Tracker, Official Forum)
The Wand of Woh is not a Torment only item. =)

So, this has been requested for a while, and it took some time to put this together in a way that made sense. Previously, many items hadn't been implemented fully, or didn't have names yet. Of course, bearing all that in mind, understand that things are always subject to change.

A couple things to note going into this list:

None of the below Legendaries include Legacy items or their remakes.

Allow me to present the (current) list of Torment-only Legendaries:

As you can see, the list is actually fairly small. The items we selected for Torment-only are to provide additional rewards and incentives to players who have advanced to higher difficulties. The vast majority of Legendaries, though, both new and old, are able to drop in every difficulty.
We'll see the final version of many of these Legendary items dropping after the next Beta patch, along with many other changes.
Recent News
Diablo III: Ultimate Evil Edition
The console Diablo III edition includes all of the Reaper of Souls content, and special social features!
PlayStation 3