Blizzard Blues on changes to the level 70 Hellfire Ring, Bounties, and more 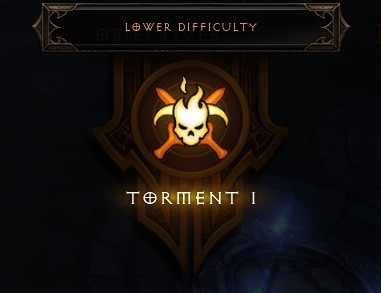 The hardcore mode in Diablo III is the high stakes version of the game, where a character is gone the first time it dies. The developers have talked previously about how they want hardcore mode to have the same features as the normal, softcore mode. There will be one big difference between the two modes once Patch 2.0.1 lands: the new Lower Difficulty feature will not be available in hardcore mode. That is one of the latest tweaks and upcoming changes discussed in recent Blizzard Blues posts.

No Lower Difficulty In Hardcore
A couple weeks ago, Grimiku discussed the new Lower Difficulty feature being added to the game with patch 2.0.1. It makes the game immediately easier, when selected, by lowering how tough the monsters are in the current game. It's all part of the new Dynamic Difficulty system. But the Lower Difficulty option is too tempting to use in hardcore mode when a player gets in a risky situation. It will only be added for softcore mode, and won't be available at all in hardcore mode.
Post by Blizzard (Blue Tracker, Official Forum)
This subject was recently visited again by the developers, and they've decided to remove the Lower Difficulty button from Hardcore mode in the next beta patch. This shouldn't change the feature at all in Normal mode, though. I'll be sure to keep an eye out for your feedback about this decision, so please be sure to let us know what you think. Thanks!

Hellfire Ring at Level 70
The Infernal Machine event that provides the Hellfire Ring has been revamped for level 70 characters. Currently on the Reaper of Souls beta test, the new ring requires level 70. That will be changing, so that the ring no longer has a level requirement, just like the old version that could be obtained at level 60. There are a number of changes coming to the Infernal Machine event, as the developers polish this game feature. Nevalistis had two posts recently where she discusses those changes, although they may not be ready by the next Beta patch.
Post by Blizzard (Blue Tracker, Official Forum)
Posted by: TheTias01/27/2014 10:43 PM

I'd say it's more an oversight that the new version has a LV requirement.

Oversight's not really the right word here, but it is unintentional that the new Hellfire Ring requires level 70.

- Hellfire Ring farming system for everyone. (suggestions for the process of obtaining the rings, in hopes of not repeating the vanilla mistakes)
http://us.battle.net/d3/en/forum/topic/11307480873

There's a lot to cover on this topic, so bear with me. Incoming Wall o' Text!

First off, I want to stress that the intent behind the Hellfire Ring system is to exist as end-game content. It's not necessarily meant for everyone - not everyone enjoys that style of play. It offers a cool reward for those who are dedicated to completing the journey, and gives you an easily identifiable goal.

It's also not meant to be something you complete in the first week of launch. It should be challenging, and take time to conquer. It should also get more rewarding at higher difficulties, and I'll cover that a bit below. All said, there was definitely room for improvement and we've learned a lot from the first iteration of the Infernal Machine event.

Let's use bullet points, because they're pretty and organized:

We've also been paying close attention to the Focused Feedback thread, and have several additional changes coming as a result of your extensive testing. This includes:


We have a couple of bugs being worked on as well, including adjusting the damage on Maghda's Arcane Sentries and requiring Level 70 Infernal Machines to open the new event.

Bounty Changes for Split Farming
Lylirra gave some more details about the recent hotfix, that was done to encourage players to stay together when farming Bounties.
Post by Blizzard (Blue Tracker, Official Forum)
Posted by: Logic01/27/2014 09:25 PM

What if I complete 90% objectives and just go back town to salvage trash and someone else finish it?

If you aren't present when the bounty is completed, you won't receive the rewards (gold, experience, or Blood Shards). However, you will receive completion credit for the bounty, so that you qualify for finishing Tyrael's quest.

How big is this area in relation to what is rendered on screen?

Should be about a screen and a half, if my estimates are correct. Try it out and be sure to let us know how these changes feel!

Groups will just split up as usual and "prep" the bounties individually like players do now with festering woods for crypt runs. The reward system doesn't scale with difficulty enough at the moment, its not worth doing bounties as a group because split farming is quicker, easier and just as rewarding as higher difficulties where you have to work as a team.

Right now, we want to see exactly what kind of behavior pans out as a result of these fixes. We're definitely keeping an eye on what's going on when it comes to this style of gameplay. The intent is to have players in multiplayer actually playing together in the same area, and we're dedicated to working towards a goal that both encourages and rewards that kind of behavior.

As you all experiment with these changes, we're taking copious notes and seeing what further needs tweaking. =)

We've put in a bug report and will be working on it for the next PTR/Beta patch. I can't confirm whether or not the fix will actually make that milestone, but the idea is that it will be in place for the launch of RoS.

Right now, for reference, we're looking at having Kadala's items still come pre-identified, but to have any associated transmogrification appearances granted on successful purchase. That functionality may evolve/change as we work on the fix, however, and we'll be sure to keep you guys updated.

Thank you for the clarification Lylirra. So I'm half right, and half wrong. :)

I wouldn't say you were wrong at all. The mechanics were working as designed, though perhaps not as intended. :D

All these changes are on top of the previously detailed changes and fixes coming in PTR/Beta patches. We will no doubt see more, as the developers busily finish the testing that needs to be done on Patch 2.0.1 before it goes live.
Recent News
Diablo III: Ultimate Evil Edition
The console Diablo III edition includes all of the Reaper of Souls content, and special social features!
PlayStation 3