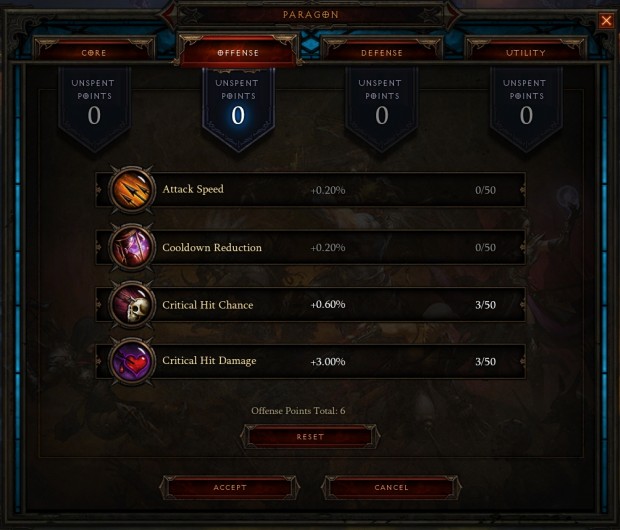 The entire Paragon System is being overhauled in Patch 2.0.1, and will turn into what is commonly called Paragon 2.0. All of that is based on Diablo III characters gaining experience at maximum level. So far on the PTR/Beta servers we have seem some big shifts in how much experience is required for Paragon levels, from patch to patch. With an upcoming PTR/Beta patch, it will become dramatically easier to gain Paragon Levels, compared to the current testing environment.

Nevalistis had a few posts discussing the change, that will require a new build for the 2.0.1 PTR and Reaper of Souls expansion Closed Beta.
Post by Blizzard (Blue Tracker, Official Forum)
We agree that Paragon leveling right now is a bit too slow. We're currently in the process of iterating on Paragon level experience and how much is needed to gain additional levels. The plan is to reduce the amount necessary to level, and in addition, increasing the amount of experience gained per monster kill.
Posted by: Starbird01/21/2014 10:45 PM

Nev, I'm not encouraged by you saying 'a bit' here.

"A bit" wasn't really the best phrase for me to use here. It's an adjective phrase that works its way into my speech too frequently, and I didn't catch myself here. Sorry about that. =(

In addition, I want to clarify that I misread how this tuning was being approached, though the overall goal is the same (i.e. quicker Paragon leveling). The amount of experience needed to gain Paragon levels was actually doubled - however, experience gained per monster kill was drastically increased and outweighs this by a significant margin. To give you a rough estimate, overall you should find that Paragon leveling will be approximately six times faster. I also want to stress that this is an overarching change, and you'll find that this change impacts the speed of gaining higher Paragon levels more than it does lower ones.
Posted by: Saidosha01/22/2014 03:36 PM

Will this then mean that paragon EXP currently acquired will result in a lower plvl with the next PTR update due to the requirement doubling?

Paragon level is calculated by raw total experience across all of your characters (with separate pools for Normal and Hardcore), so I don't believe you'll see a drop.

Is this something we will see in the next build or will it be a hotfix?

This will require a patch.

Six times faster than the current PTR/Beta build. Sorry for not clarifying sooner! It's a little hard to compare this system to the live environment because in the new system, you can surpass Paragon 100. As I mentioned before, it's much easier to notice the increase in leveling speed the higher Paragon level you attain.

*Edit* Also, Wyatt's one-upped me and given much more detailed information here. ;P

As noted above, Wyatt Cheng delved into specifics of the changes in a reddit thread about the change to Paragon level. As he points out, there is lower monster density in many places in Patch 2.0.1 compared to live, and the Nephalem Valor bonus is being removed from the game. The huge increase in experience per monster kill, and the changes to experience required for each Paragon level, are being done to help balance that out.

Hey guys I want to provide some clarity as some of the comments here are misinterpreting the change.

You have a Paragon leveling rate that you see now on live. Let's call that the "Live rate"

You have the Paragon leveling rate seen on the PTR, let's call that the "PTR" rate.

You have the new rate that Nevalistis is referring to, we'll call that "Anticipated 2.0" rate

It varies with level and I don't remember the exact numbers off the top of my head but our design intent is to offset the loss of XP from 5 stacks and density.

There are many variables at play as well. Adventure Mode has it's own rewards. It's hard to compare Bounty rewards vs. the benefit of a highly optimized/efficient run. There are more events in the game now. The change from 60 to 70. "Difficulty 2.0". All of these factors means it doesn't make sense to do a direct comparison of the XP of any one particular monster - but rather when all factors are put together we don't want XP rates cut in half compared to live. The XP per monster happens to be one of the tuning variables in our toolbox.


Here at Diablo Somepage we track the Paragon levels and other data for over 3 million Diablo III characters. BattleTags can also be added for characters we haven't seen yet. We also automatically convert the old Paragon levels into the new Shared Paragon Levels for any Diablo III characters we scan. Once the next test build brings these big changes to Paragon Leveling, we will update our data to reflect the updated Paragon leveling numbers.
Recent News
Diablo III: Ultimate Evil Edition
The console Diablo III edition includes all of the Reaper of Souls content, and special social features!
PlayStation 3