Level 60 characters will be able to access Torment difficulty 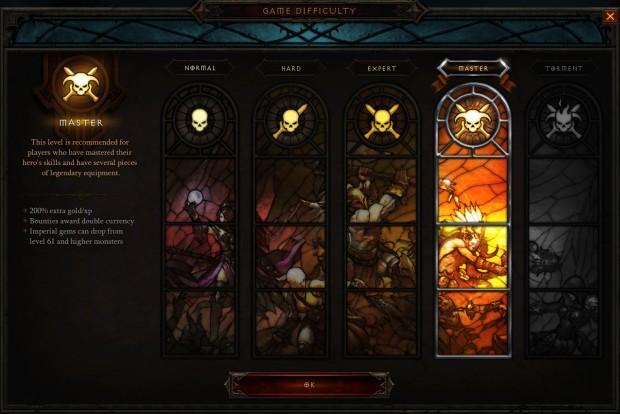 Testing is continuing for both Diablo III patch 2.0.1 (also known as the Loot 2.0 Patch), and the Reaper of Souls Expansion. One of the restrictions on the patch 2.0.1 PTR is that the highest difficulty level, known as Torment difficulty, is not available. That will be changing with the next PTR patch, when Torment difficulty will become unlocked for any account with a level 60 character.

Post by Blizzard (Blue Tracker, Official Forum)
We've heard some pretty significant feedback regarding the current difficulties available to players on the PTR. As a result, the intent next PTR patch is for Torment to unlock once you reach level 60, which will provide access to players both on the PTR and Closed Beta.
Posted by: Nevalistis01/14/2014 12:53 PM

As a result, the intent next PTR patch is for Torment to unlock once you reach level 60, which will provide access to players both on the PTR and Closed Beta.

To compensate for Torment unlocking at level 60, in the next PTR/Beta patch the requirements for Master are going to shift and the difficulty will now unlock after you complete Act IV. \o/
Posted by: HeavyDuty01/14/2014 01:33 PM

Is this to only test torment in the PTR or is this how it will run live?

This change will available for testing in the next PTR patch. (For clarity, the change will also affect the Beta, not just the PTR.)
I read that as "We (players) will need to complete all of act IV in Master before we can test torment difficulty". Is that correct?

Don't think so. It's more like completing Act IV unlocks Master, level 60 unlocks Torment but it's very confusing. Master difficulty is currently open from the beginning so.... @Nevalistis?

Note that the "unlock" is account-wide, not character specific. So, once a difficulty is unlocked, it's available to every character on your account, even brand new ones.

Master is probably open for you because you've already met the criteria for it on at least once of your heroes (right now Master unlocks at level 60). The only difficulties that don't have an unlock component are Normal, Hard, and Expert, which are available right from the start.

So to clarify, does this mean it's possible to have Torment unlocked without having Master unlocked if we don't have the expansion/Beta?

You're talking about an outlier scenario where someone who hasn't already killed Diablo at least once by the time that patch 2.0.1 goes live decides that he/she wants to grind up to level 60 without ever completing Act IV? (Just clarifying exactly what you're asking here.)

*You only need to meet the corresponding criteria on one of your characters to unlock the difficulty for your entire account.

**Still clarifying what levels of Torment will available for non-RoS players. Will get back to you on that.

As noted above, the Torment difficulty itself has a slider that provides increasing difficulty, from Torment 1 all the way up to Torment 6. It is unknown at this time if all of the Torment difficulties will be unlocked for level 60 characters, or just some of them.
Recent News
Diablo III: Ultimate Evil Edition
The console Diablo III edition includes all of the Reaper of Souls content, and special social features!
PlayStation 3