Pre-order the new Diablo III novel, which tells the story up to the expansion

The story of Diablo III is told through the game itself, but also in official novels that explore the universe around the game. The next novel is Diablo III: Storm of Light, which is scheduled to be released on February 4. An excerpt from chapter 4 of the novel is now available, showing the tension in the Angiris Council as they ponder the fate of the Black Soulstone.

The book can be pre-ordered at a discount from Amazon.com (Canada, UK). Here's the sneak peek at the upcoming expansion of the Diablo III story!

Post by Blizzard (Blue Tracker, Official Forum)
"Of late, my dreams as haunted by one thing: the Black Soulstone. I see the crystal reflected in all things, at all times. It has become my obsession, my purpose in life."

A few months ago we announced the upcoming Diablo III: Storm of Light, and today we're thrilled to offer you an exclusive preview ofÂ this epic new chapter of Sanctuary's continuing story, which is set to be released on February 4, 2014. 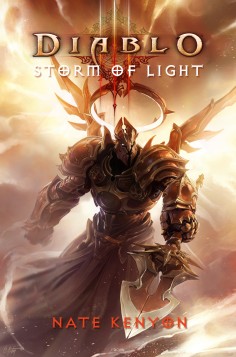 Written by Nate Kenyon, author of The Order, Storm of Light is a bridge between the events of Diablo III and the story that is to come in its first expansion, Reaper of Souls. This new novel is now available for pre-order atÂ Simon and SchusterÂ andÂ features Jacob and Shanar from the Sword of Justice comic series, as well as other characters from the Diablo universe that players have previously met.

In Storm of Light, the Angiris Council has recovered Diablo's Black Soulstone and they now stand vigil over the cursed artifact deep within the glimmering Silver City, unwittingly condemning the High Heavens to its dark corruption. Imperius and the other archangels vehemently oppose moving or destroying the crystal, leading Tyrael to put Heaven's fate in the hands of mortals. Drawing powerful humans to his side from the far ends of Sanctuary, Tyrael reforges the ancient Horadrim and charges the order with an impossible task: to steal the soulstone from the heart of Heaven.

Read on for an exclusive excerpt from Chapter 4 of Storm of Light!

"Then tell us what insights you have gained from Chalad'ar, Wisdom," Imperius said, his voice mocking once again. "Tell us what to do with the stone. The Council has been divided on this for too long. Or are the rumors among the angels correct, and you have yet to consult the chalice?"

Itherael and Auriel turned to Tyrael, waiting for him to offer a solution. He looked at the soulstone on its perch, imagined he saw a beat of blood-red light at its core. The darkness pervades this holy place, he thought. It creeps in unbidden and corrupts everything it touches.

Tyrael had come to his own decision. But he was unsure about how his advice would be taken by the others and hesitated for a moment too long.

Imperius turned away. "Malthael would have never been without an answer, yet this one is silent once again. I shall speak for him, then. We break the stone at the Hellforge."

A murmur from Auriel brought a fast response. "We should not risk destroying it," Itherael said. "It was forged by human magic; its destiny is a mystery to me. Even the Scroll of Fate cannot tell us what might result from such an attempt--"

"It must be hidden!" Tyrael said.

His words rang out, stronger than he might have intended. The others stopped, their attention returning to him. He cleared his throat again, hating how weak it made him sound. A throat made of flesh and blood was not a trustworthy vessel for such a speech. He tried again. "Itherael is right," he said. "The Black Soulstone's power is unknown to us. The Horadric mage Kulle forged it using magic the nephalem alone possess. We cannot risk trying to destroy a thing like this; it may even release the Prime Evil upon us once again."

"Hide it where?" Auriel's tone had grown cautious, as if she knew what he might say. "We have already discussed shrouding it but could not come to an agreement. It cannot stay in the Council chambers forever."

Tyrael looked at his fellow archangels, sadness washing over him. He imagined that they viewed him with suspicion, perhaps thinly veiled hostility. Even Auriel's aura had changed, her wings pulsing softly with a light that mirrored the taint he had seen in the gardens among the trees.

He was not Justice, nor Wisdom, nor was he a man; he was a mortal angel, and this did not fit with the world they knew, or with any other. His vision of peace with the land of men and a new life ending in eternal sleep was swiftly fading.

He had never meant for it to come to this.

"In Sanctuary," he said finally. "We must hide the stone in a place where neither angel nor demon can reach."

So prepare for the return of Tyrael and the new Horadrim, and make sure to pre-order your copy of Storm of Light today so that you can be among the first to find out what happens to our heroes in their next great adventure!