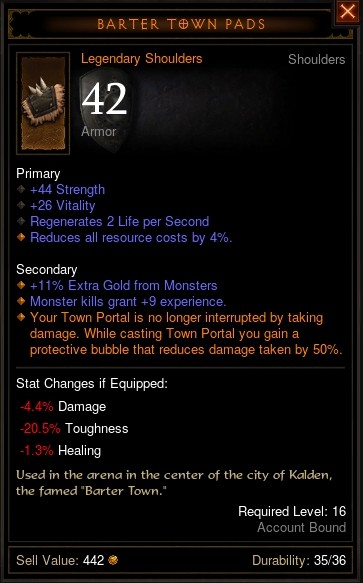 There are hundreds of new and updated Legendary and Set items that will be arriving in the Reaper of Souls Expansion, and they have been dropping frequently in the ongoing Friends & Family beta. Continuing from the original Loads of Legendaries news, here is another group of interesting items from the early beta testing of the expansion.

A level 16 version of the revamped Legendary Barter Town Pads can be seen above. This shows how Legendary items can drop at all levels in the new Loot 2.0 design of Diablo III. These pauldrons now provide the unique power "Your Town Portal is no longer interrupted by taking damage. While casting Town Portal you gain a protective bubble that reduces damage taken by 50%." This will likely be a coveted item for hardcore characters, that could increase the chance of surviving a dangerous situation.

The three Legendary rings below no longer drop in the beta. As detailed recently in the first set of Friends and Family Beta Hotfixes, these immunity rings no longer drop, and the listed special power is no longer active on the rings that already exist in the beta. The immunity and healing that they provided was deemed out of balance, and so the developers are working on new versions of their special abilities. The other rings that provided immunity to Poison or Arcane damage were listed in the first Loads of Legendaries post; here are the rings that gave immunity for Fire, Cold, or Lightning: 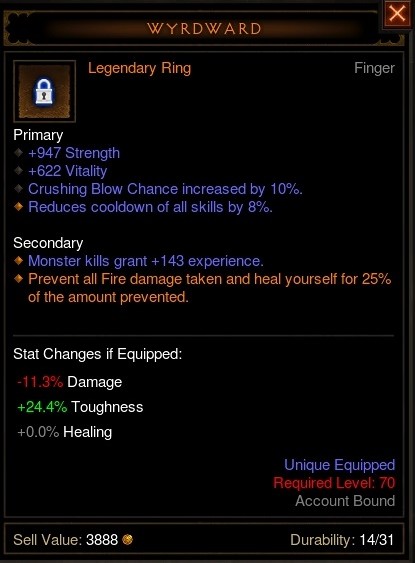 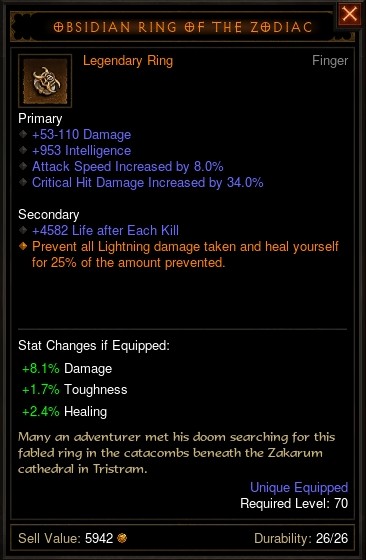 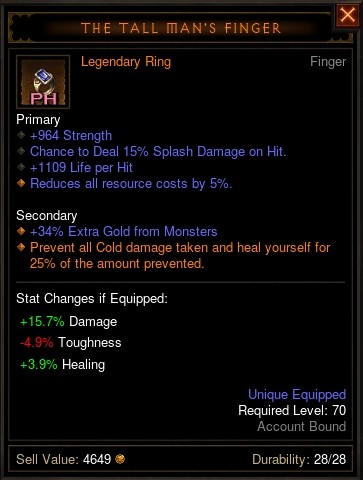 Here is another interesting new Legendary. This is a level 61 version of Thunderfury, Blessed Blade of the Windseeker, which is new to the world of Diablo but well known in Blizzard's online game World of Warcraft. Much like the sword in that game, Thunderfury in Diablo III will have the special power "Chance on hit to blast your enemy with Lightning and slow its attack speed and movement speed. This effect jumps to additional enemies." 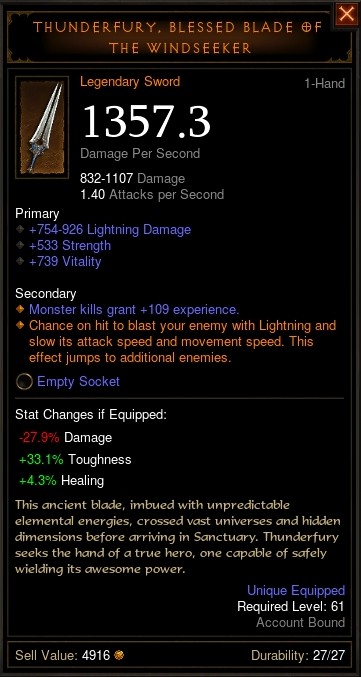 Read on for more of the new and revamped Legendary items in the beta!


Legendary Weapons and Holdables
First up are a number of Legendary weapons and holdable items, that are entirely new or overhauled from the legacy versions. A level 70 version of the remade Legendary Daibo The Clouds and the Moon, which has the stat "Removes the cooldown of Seven-Sided Strike." Currently very few Monks use Diabo weapons; this is the sort of Legendary that could change that. 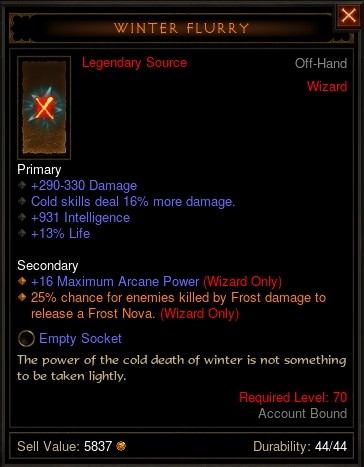 The level 70 version of the revamped Wizard Source Winter Flurry, which has the unique power "25% chance for enemies killed by Frost damage to release a Frost Nova.". 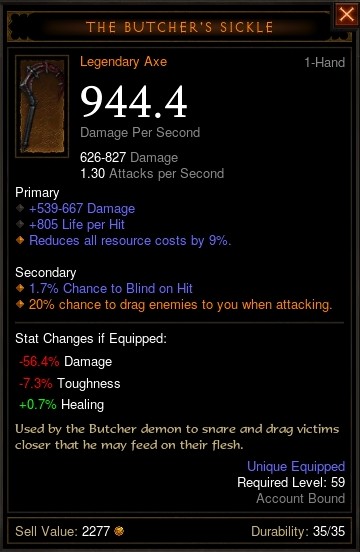 A level 59 version of the reworked Legendary Axe The Butcher's Sickle, which now features the stat "20% chance to drag enemies to you when attacking." 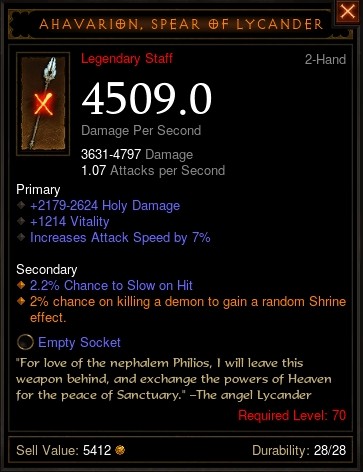 A level 70 edition of the new Legendary weapon Ahavarion, Spear of Lycander. Although listed in the name as a Spear, the item is currently a Staff in game. It features the stat "2% chance on killing a demon to gain a random Shrine effect." 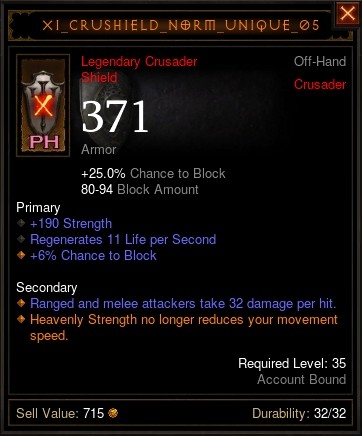 A level 35 version of a new Legendary Crusader Shield, which still has a placeholder name. The shield provides the stat "Heavenly Strength no longer reduces your movement speed." The Heavenly Strength passive allows a Crusader to wield a two-hand weapon while also wearing a shield, but with the drawback of -10% movement speed; this shield negates that drawback. 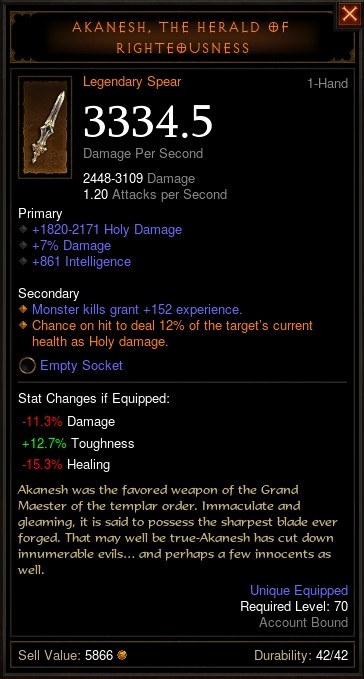 A level 70 version of the new Legendary Spear Akanesh, The Herald of Righteousness, that features the stat "Chance on hit to deal 12% of the target's current health as Holy damage." 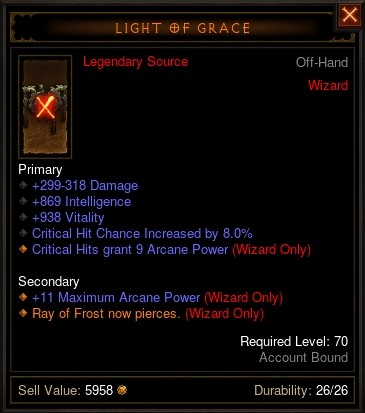 A level 70 edition of the new Wizard Source Light of Grace, which provides the unique power to a Wizard: "Ray of Frost now pierces." 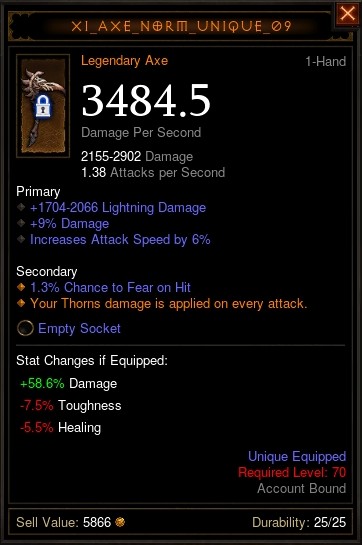 A new Legendary axe that currently has a placeholder name, this weapon provides the stat "Your Thorns damage is applied on every attack." This is the sort of Legendary item that encourages a player to gear very differently, such as Enchanting other items to have the Thorns stat, for a big damage boost. 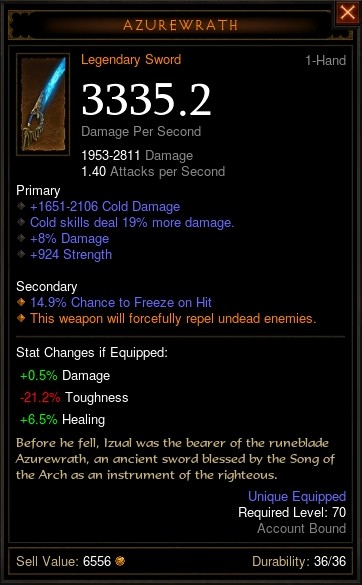 An updated version of the Legendary one-hand sword Azurewrath. It still has the same unique power "This weapon will forcefully repel undead enemies." The narrower damage that can roll on weapons is shown here, compared the wide range possible in Diablo III Vanilla. 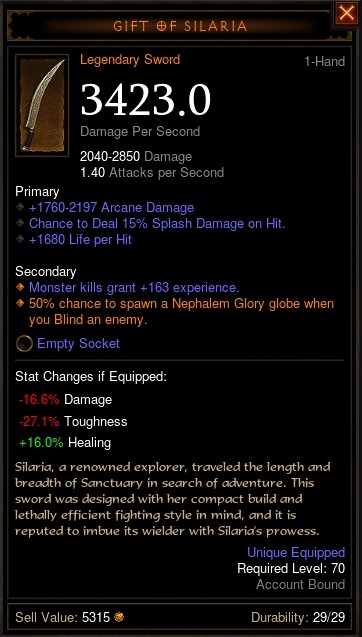 A level 70 edition of the new Legendary one-hand sword Gift of Silaria. It features the stat "50% chance to spawn a Nephalem Glory globe when you Blind an enemy." A level 69 version of a Legendary Wand called Wand of Woh, which has been listed in the Diablo III data files for a long time, but was never put in the game during Diablo III Vanilla. The wand now will be added, with the stat "Removes the cooldown of Explosive Blast."

Legendary Armor
There are also many new and updated Legendary and Set armor pieces in the beta. Here are some of those. A level 70 version of the new Legendary Bracers Ancient Parthan Defenders, which have the unique stat "You take 25% less damage for each enemy that is stunned within 25 yards of you." This is a level 67 version of the new Legendary Bracers Haroutunian Arm Guards, with the unique stat "Every time you destroy a wreckable object, you gain a short burst of speed.". A level 53 edition of the revamped Legendary Bracers Promise of Glory, which now have the stat "After earning a survival bonus, quickly heal to full Life." A survival bonus is when a character gets down to under 10% health and manages to not die. After combat is over, a message comes up like: Survival - Down to 5.8% health and survived! These bracers heal up a character in that situation, to full Life. 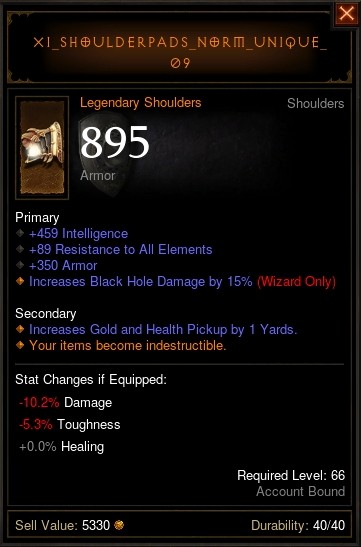 These are a level 66 version of some unfinished Legendary Shoulderpads, that have not been given their name or description. The unique power they provide is simple: "Your items become indestructible." 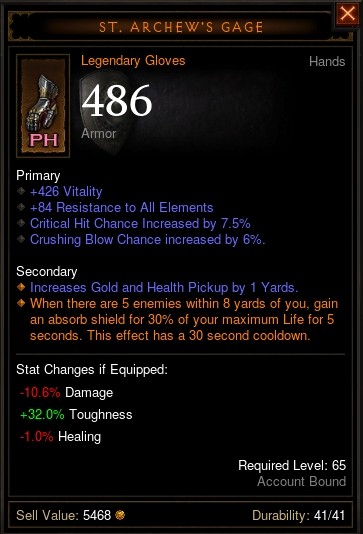 A level 65 version of the new Legendary Gloves St. Archew's Gage, with the unique stat "When there are 5 enemies within 8 yards of you, gain an absorb shield for 30% of your maximum Life for 5 seconds. This effect has a 30 second cooldown." 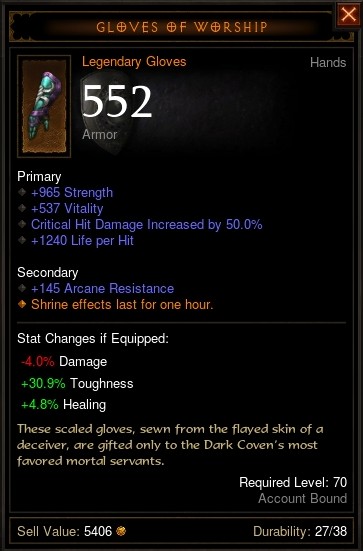 A level 70 version of the new Legendary Gloves of Worship, with the stat "Shrine effects last for one hour." So far in beta this has proven to be a very popular legendary, as players with the gloves scour the area for multiple shrines, use them all at once and then go on a killing spree. 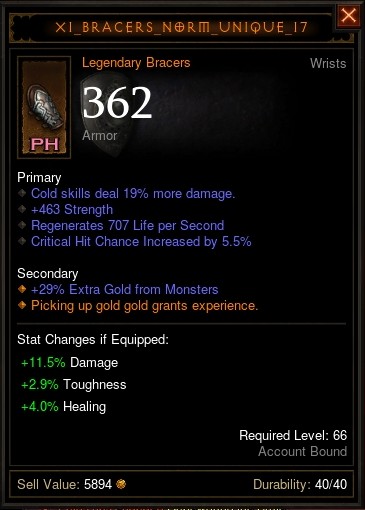 A level 66 edition of some new Legendary Bracers that still have a placeholder name. These bracers provide the unique power "Picking up gold grants experience."

Finally, here is a level 70 version of the updated Monk Set pants Inna's Temperance. Although some of the base stats are similar to the old version, the 4-piece set bonus is a powerful new stat for Monks: "Gain the base effect of all four Mantras at all times." Having the combined power of Mantra of Conviction, Mantra of Evasion, Mantra of Healing, and Mantra of Retribution all at once will be an impressive boost.

Check back soon for more info from the expansion beta. See the first Loads of Legendaries news for other items seen on the test server.
Recent News
Diablo III: Ultimate Evil Edition
The console Diablo III edition includes all of the Reaper of Souls content, and special social features!
PlayStation 3