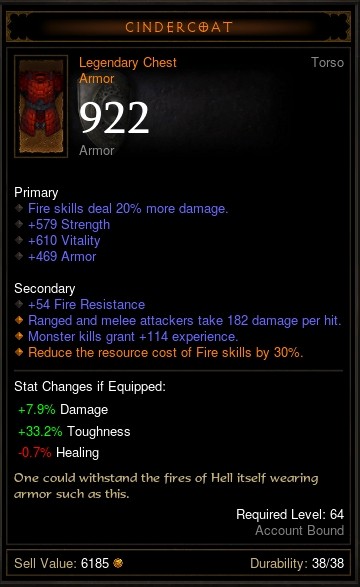 The first day of the Friends & Family Beta for the Reaper of Souls Expansion went smoothly, with many people playing on the test server. Here are some of the Legendary and other items that dropped and were being linked in chat, with a lot of fun new abilities on them. Some of these are brand new Legendary items, while others are revamped editions of legendaries that Diablo III players already know, given a twist.

Three of these items dropped for us while leveling a Barbarian up from level 60: the revamped Legendary Cindercoat shown above, with the item stat Fire skills deal 20% more damage and the legendary-specific stat Reduce the resource cost of Fire skills by 30%; a new version of the Set weapon Immortal King's Boulder Breaker; and the Rare amulet below.

Note that this is very early beta. There are placeholder icons that will be replaced later, as shown with the [PH] icon seen on some items. Some of these items may change entirely by the time the expansion is released. With that in mind, here are some fun new items! 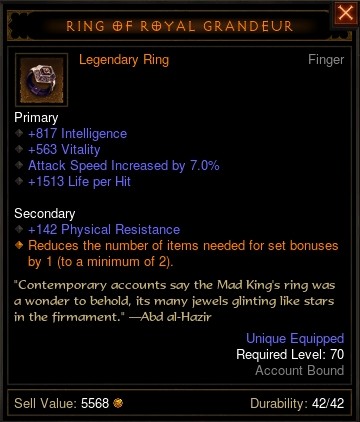 The level 70 version of a new Legendary ring Ring of Royal Grandeur, with the stat Reduces the number of items needed for set bonuses by 1 (to a minimum of 2). 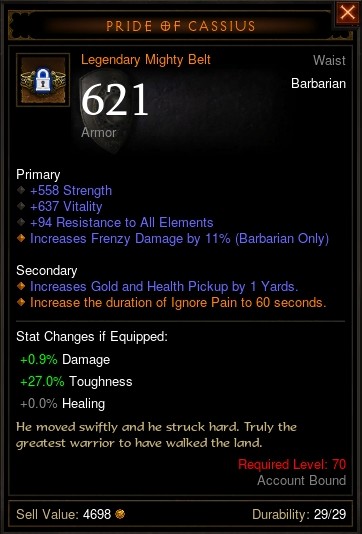 A new level 70 version of the Legendary Might Belt Pride of Cassius. The Barbarian item essentially makes Ignore Pain permanent with the stat Increase the duration of Ignore Pain to 60 seconds. 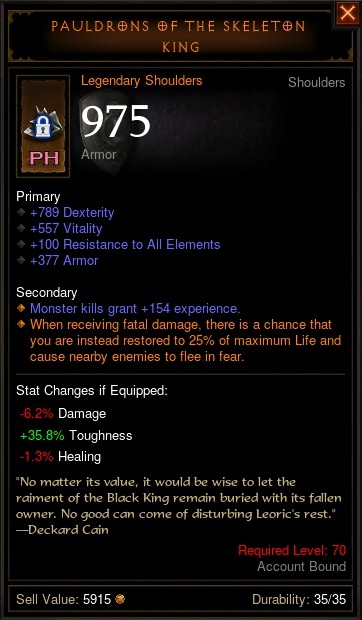 A level 70 edition of the new Legendary shoulder item Pauldrons of the Skeleton King, it has the stat When receiving fatal damage, there is a chance that you are instead restored to 25% of maximum Life and cause nearby enemies to flee in fear.

Read on to see a dozen more items that dropped in the beta. 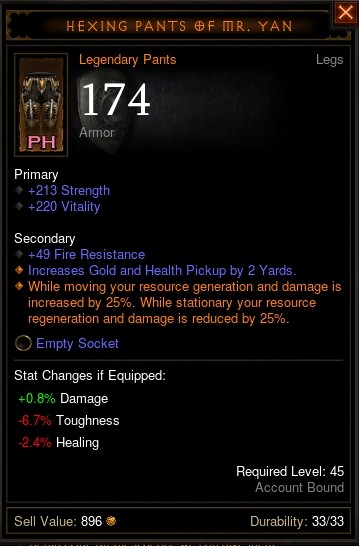 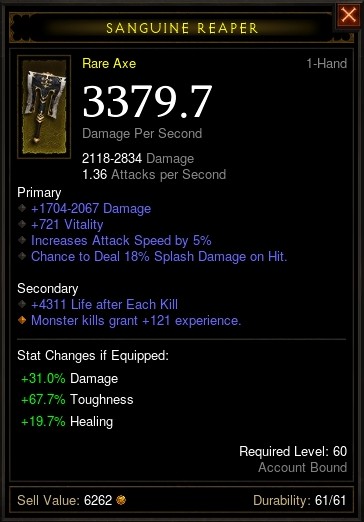 This Rare 1-hand Axe has had one of the stats rerolled by the owner. This can be seen by the fact that the item is Account Bound, which happens to Rare items when they are Enchanted. 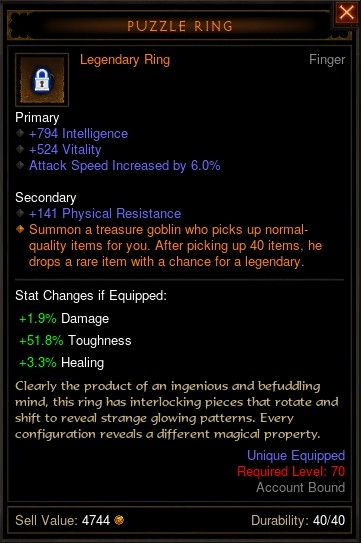 A level 70 version of the revamped Puzzle Ring, with a more useful goblin than the old one. 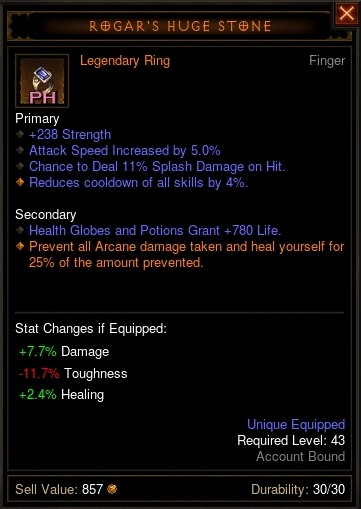 The level 43 version of a new Legendary ring Rogar's Huge Stone, with the stat Prevent all Arcane damage taken and heal yourself for 25% of the amount prevented. 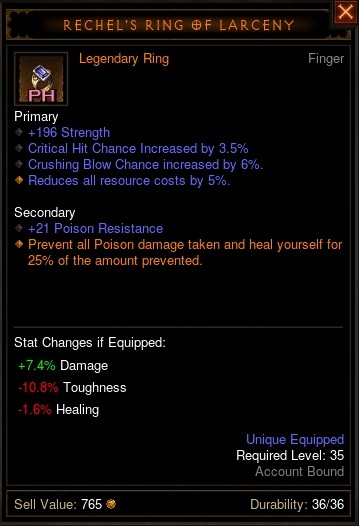 Similar to the ring above, this new Legendary ring Rechel's Ring of Larceny has the stat Prevent all Poison damage taken and heal yourself for 25% of the amount prevented. These sort of item affixes are going to be increasingly useful in Reaper of Souls, because of the new monster abilities that do all different types of elemental damage. 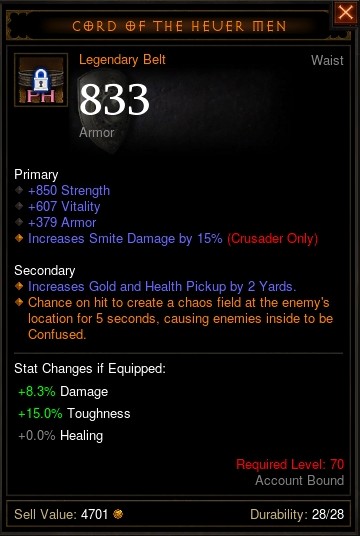 The level 70 version of a new beefy Legendary belt for Crusaders, called Cord of the Heuer Man. It has the stat Chance on hit to create a chaos field at the enemy's location for 5 seconds, causing enemies inside to be Confused. 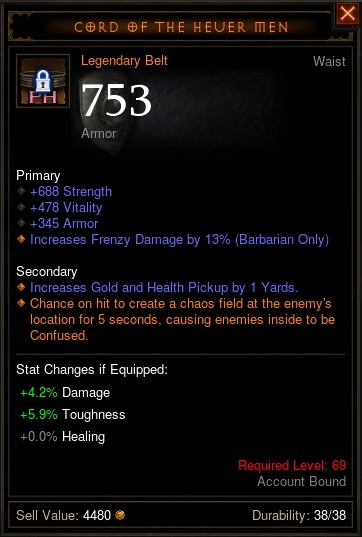 Another copy of that belt, with a Barbarian bonus on this one.

This was a personal drop, for our Barbarian at level 64. This new edition of the Barbarian set weapon Immortal King's Boulder Breaker was quite an upgrade, once it had a new Imperial Emerald gem socketed in it. 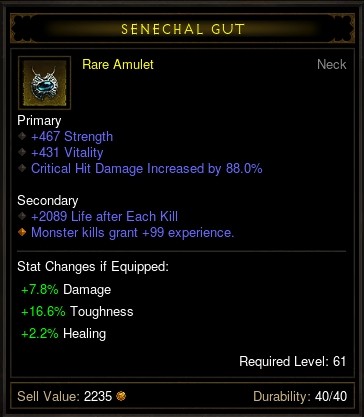 Another personal drop, as an upgrade at level 61 for a character who never crafted the Account Bound amulets. 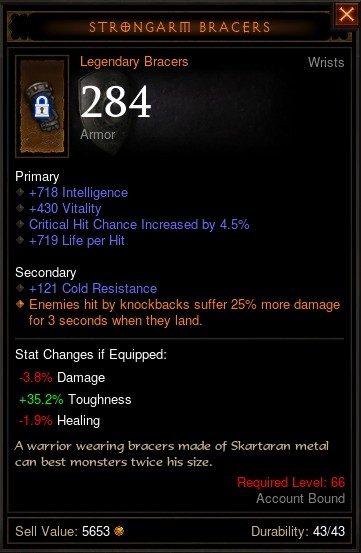 An updated edition, at level 66, of the Legendary Strongarm Bracers. The old version of those had the stat 1.0â€“5.1% Chance to Knockback on Hit, and that same idea continues with the new legendary-specific stat Enemies hit by knockbacks suffer 25% more damage for 3 seconds when they land. 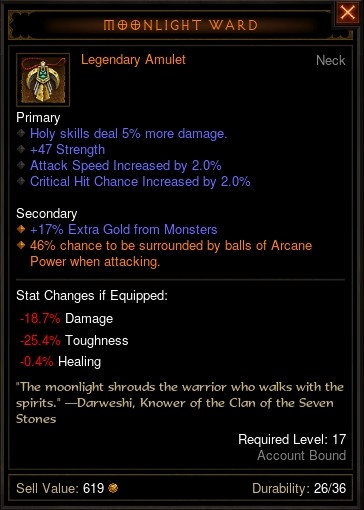 A level 17 edition of this Legendary, the new edition of the Moonlight Ward amulet has the stat 46% chance to be surrounded by balls of Arcane Power when attacking. 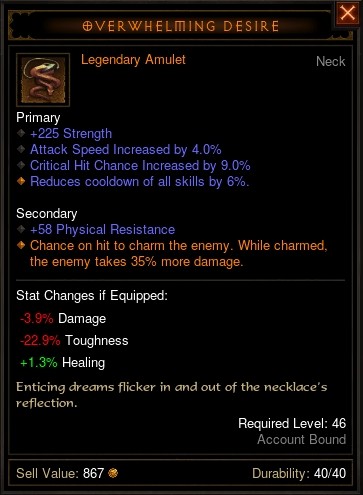 A level 46 version of the new Legendary amulet Overwhelming Desire, which appropriately has the stat Chance on hit to charm the enemy. While charmed, the enemy takes 35% more damage.

For even more images of items in the beta, a recent Reddit thread has a nice selection. We'll have more info ourselves from the Reaper of Souls beta, as we delve further into it!