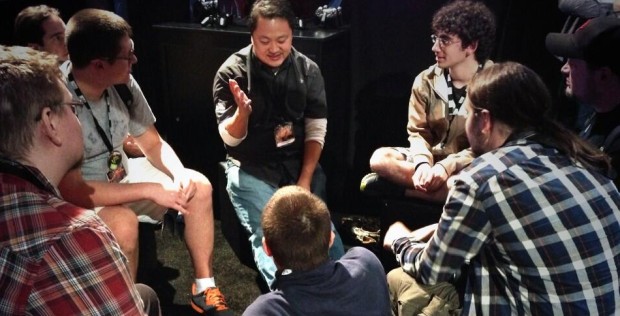 The Nephalem Valor system will be removed entirely in the 'Reaper of Souls' expansion. Diablo III senior technical game designer Wyatt Cheng discussed many upcoming gameplay system changes, during a BlizzCon 2013 Community Booth chat, as seen above. He also made a number of comments at reddit recently regarding the topics, and why Pickup Radius is being reduced on Diablo III characters.

In a reddit report from the community chat, there were three main topics covered, as detailed by one of the attendees: Read on for more details about these topics from Wyatt Cheng, and his thoughts about changing Pickup Radius.

As can be seen in our Bonuses Calculator, the Nephalem Valor system currently provide big boosts to certain stats. In a reddit thread Cheng discussed why the Nephalem Valor system was being removed, although he personally wasn't sure about the change. But given the team effort that goes into the design and development of Diablo III, the overall decision had been made to cut the system, since it was deemed no longer needed.
Thanks for the shout-out. I must emphasize Diablo III is a team effort. It's a great privilege to be able to talk about the game but there is an incredible team working hard and passionately on RoS. I answered a question at Blizzcon about Nephalem Valor being removed, but that was a group decision. In fact, I was against it :) There are strong arguments on both sides but ultimately we removed NV with me kicking and screaming :). Fortunately for us we're in development mode right now so we can do iteration on game systems like this. The team is hard at work figuring out how to improve this game we all love.

Might I ask why you wanted to keep it?

Hrm, without going into too many details:

Cheng also went into more depth on what the developers are planning, about changes to game mechanics and pacing. This continues the thinking that he has expounded on in previous threads, and going back to discussions in May.
Hi I just wanted to come in and provide additional detail on some of the damage philosophy stuff we talked about at the Blizzcon Community Booth. I think everybody at the booth was able to internalize the core of the philosophy and I want to make sure people reading this write-up afterwards understand what is happening too.

When I say we want mechanics in the game that cause unavoidable damage this absolutely does NOT mean you’re supposed to just die. The idea is not “random damage, now you’re dead LOL” the idea is to give people a sense for where they stand. I think right now when some people hear “unavoidable damage” they think “unfair deaths”. This is not the intention. Paradoxically by adding unavoidable damage in controlled and moderated amounts we are working to make death feel MORE fair. Confused? Let me explain.

Right now deaths in the live environment don’t always feel fair for a variety of reasons. One of the many reasons deaths don’t always feel fair is the game doesn’t clue you in on how much survivability you should gear for. Indeed you can be cruising along slaying some monsters and suddenly get Vortex’ed into a Frost Orb and die instantly. Up until that Vortex/Frost Orb combo, you weren’t taking any damage at all.

Why did you die instantly to the combo? Maybe it’s low survivability on gear. But you had no idea!

Let’s say that most players with “average” gear have 300,000 effective health. How much damage should a monster melee attack be doing? Maybe 25K damage? That lets you take 12 sizable melee hits. Sounds about right. Now imagine a particularly skilled demon hunter has sacrificed all defense on their gear to maximize damage and has only 50,000 effective health. This Demon Hunter is incredibly squishy but the game feels “right” because she’s still taking 0 damage through skilled play. Now you get hit by a Vortex/Frost Orb combo which chunks off half your health, followed by a single melee hit from a monster which kills you. This death feels incredibly unfair. From the Demon Hunter’s point of view, she was taking no damage at all, and then suddenly she was dead. There was no warning, just a vortex and a death.

So now let’s highlight a specific change coming in Reaper of Souls for Desecrator. Currently on live Desecrator appears under your feet and deals no damage for the first 1.5 seconds or so. After the first 1.5 seconds you start taking continual damage over time until you leave. In Reaper of Souls this is changing so that you start taking damage immediately. The damage per second is less than it currently is on live to offset the fact that it starts immediately. Why is this a good change?

For starters, it means that the faster a player exits Desecrator, the less damage they take. Previously there was no difference between leaving the Desecrator in 0.7 seconds vs 1.4 seconds. With the new Desecrator, a player who gets out in 0.7 seconds will take half as much damage as the slower player. There is a continuous spectrum that basically says “You’re going to take damage, but how much damage you take depends on how quickly you get out.”

Additionally, this change gives the Demon Hunter from our previous example a much better sense of where she stands with respect to her survivability. On MP0 you might take 10K damage per second in Desecrator. With 50K effective health she notices she’s missing some health but she says to herself “I could stand in that for 5 seconds if I had to”. However, she turns up the MP and suddenly now she’s taking 25K damage per second. Now she’s thinking “That Desecrator is starting to hurt, and it’s stressful. I can only stand in it for 2 seconds before I die, and even getting out in 0.5 seconds I am losing 25% of my health”. By doing moderated amounts of unavoidable damage, the player can get an intuitive sense for how risky they can be. You can still perform much better as a highly skilled player but there are less surprises. Suppose 0.5 seconds of Desecrator, a monster melee attack and a Frozen explosion all do roughly the same damage. At the point that you notice a Desecrator is “pretty scary” you now have the information to extrapolate that a Vortex/Frozen/Melee attack combo is going to kill you.

Ideally Diablo is a game where both your play skill matters and your gear matters. This applies to damage and survivability. We have survivability stats on gear for a reason and we want to make sure you get a tangible benefit from it. Your skill allows you to minimize how much damage you take, your gear determines how much of a buffer you are comfortable with.


Finally, Cheng provided some insight in another reddit thread, about why Pickup Radius is being reduced in the expansion.
Pickup radius was reduced because we've ultimately decided that the current values do more harm than good.

With the incoming changes coming to combat pacing, health globes are more valuable than in the current live environment. You don't just want them to proc passives, hopefully you'll actually want them to (gasp) heal!

After many (many) hours of playtesting we concluded that large health globe pickup causes you to heal without even realizing why. One word we use a lot about on the team is INTENTIONALITY. We want to bring back some of the intentionality of picking up a health globe.

Remember back in Nightmare difficulty when you'd save a health globe and come back to pick it up later? Or maybe you saw a health globe drop and you'd brave your way past some baddies to pick it up because you wanted the heal? We love that dramatic moment, and we want it to happen more often. Considering it barely happens at all in the live game, even happening once in a blue moon would be great for the dramatic moment it creates.

All that said, this change is still being evaluated. So far results seem good. Of course, we wouldn't want to inadvertently nerf some other builds such as Witch Doctor passives that look at your pickup radius. If we like the change overall we'll adjust the passive to make sure it doesn't become useless.
Recent News
Diablo III: Ultimate Evil Edition
The console Diablo III edition includes all of the Reaper of Souls content, and special social features!
PlayStation 3