An overview of Adventure Mode, featuring Bounties and Nephalem Rifts

An entirely new way to play Diablo III will come in the Reaper of Souls Expansion, with the Adventure Mode. Here's an overview of the new mode, and the Bounties and Nephalem Rifts in it, providing new gameplay.

The world of Sanctuary is about to get a whole lot bigger. . .

In DiabloÂ® III's upcoming expansion, Reaper of Soulsâ„¢, players will have the opportunity to choose between two different modes whenever creating a new game: Campaign Mode and Adventure Mode.

These modes can be accessed at any time, and you're welcome to switch between them whenever you please. In addition, we've unlocked all difficulty levels, giving you even more control over your in-game experience. Don't want to play through the story four times on each of your characters? Done. Looking to farm in Adventure Mode at one difficulty, then switch over to Campaign Mode at a different difficulty? You've got it. 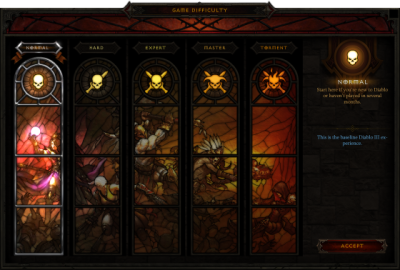 Having the ability to go wherever you want whenever you want is certainly compelling. But, what if you're not in the mood to choose your own adventure and would instead prefer a little direction? Enter Bounties.

Bounties are optional, randomized objectives available only in Adventure Mode. In addition to providing players with a guided experience within a specific Act, Bounties are also intended to showcase all the different content Diablo III has to offer. Some example of Bounties you can pick up include slaying a unique monster (like Mira Eamon), killing a boss (like Queen Aranae), clearing a dungeon (like the Khazra Den), and completing an event (like Last Stand of the Ancients).

Each Act will have its own set of randomized Bounties for players to explore and conquer, and you'll receive new Bounties each time you start a new Adventure Mode game. 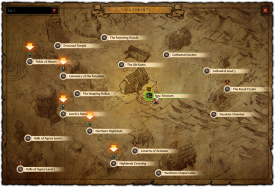 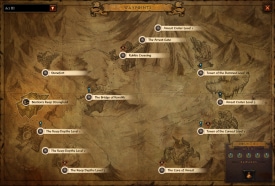 For completing a set of Bounties, players will receive gold and experience. We also want Bounties to provide access to powerful Legendary items unique to the system, but we're still experimenting with how that reward mechanic will work. Definitely stay tuned! 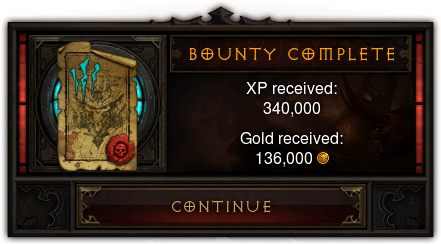 Nephalem Rifts (previously called "Loot Runs") are randomized dungeons that are designed to be completed within 10-15 minutes. The goal of Nephalem Rifts is to provide players with a rewarding, endlessly replayable experience, one that continually offers new and exciting moment-to-moment gameplay. . .as well as heaps of loot. They're also what senior level designer Jesse McCree likes to describe as an opportunity to "break all the rules."

So, what does this mean in terms of actual gameplay?

First off, it means that Nephalem Rifts are completely randomized, featuring different content from Acts I-Vâ€”random interior and exterior tile sets, random layouts, random lighting and weather, random monsters, and (of course) a random boss encounter to cap it all off.  Each Nephalem Rift dungeon can be up to 10 levels deep, but even that's random too!

Here's just a peek at some of the crazy combinations you can experience as a result of this design: 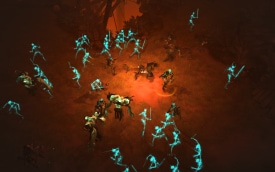 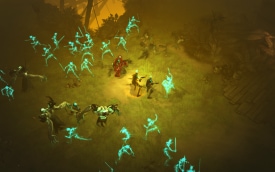 In the spirit of breaking all the rules, Nephalem Rifts also include new shrines that will provide players with some pretty insane temporary buffs when activated, things like invulnerability, massive movement speed boosts, and a lightning aura that will one-shot any enemies who get within range. While these shrines would be overpowered in the campaign, they fit well within the self-contained environment of Nephalem Rifts.

We've had fun experimenting with monster density as well, which means there's always a chance your Nephalem Rift (or even one of the levels within a specific Rift you've opened) might suddenly get a little. . .crowded. For example, what would happen if we paired Skeleton Summoners from Act I and Morlu Incinerators from Act IV? Well, it'd look a little something like this: 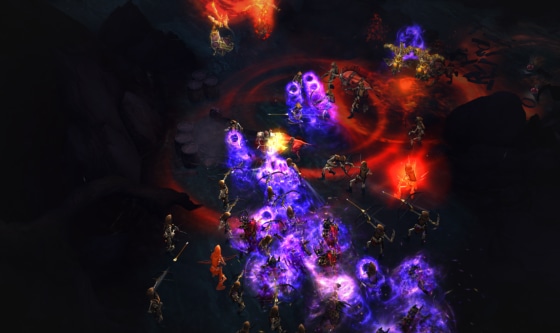 To access Nephalem Rifts, simply bring a Rift Keystone to any town hub and click on the nearest Nephalem Obelisk. Step through the portal and get ready to kill ALL the things. As noted above, Rift Keystones can be earned by completing Bounties; however, they can also drop randomly anywhere in the world while in Adventure Mode.

As a special treat, we've put together a short video featuring Nephalem Rifts in all their random, chaotic glory. Please enjoy this first look at Diablo III: Reaper of Souls!

If you're at BlizzConÂ® this weekend, you can try out Adventure Mode first-hand at the Diablo III: Reaper of Souls PC demo area in Hall A of the Anaheim Convention Center. Just queue for the "Adventure Mode" line and get ready to explore!

For those of you at home or tuning in with a Virtual Ticket, be sure to stay tuned to diablo3.com for all the latest new and updates, including panel recaps, interviews, photos and links to coverage from media and fan sites in attendance.