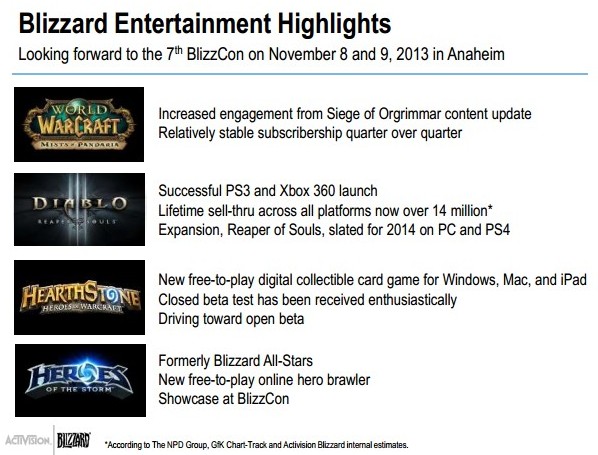 Diablo III has sold over 14 million copies across all platforms, and World of Warcraft has staunched the flow of subscribers for at least one quarter, from data provided in the Blizzard Activision Q3 2013 earnings report. Just a few days before BlizzCon 2013 provides an abundance of news about Blizzard's games, the latest quarterly report from Blizzard Activision gave a few tidbits of info. These include details from their press release, and from comments made by Blizzard CEO Mike Morhaime during the earnings report conference call.

Those console sales also boosted Blizzard's bottom line: Mr. Morhaime stated that the company ended higher in net revenue and and operating income for Q3 versus Q2, mostly due to the Diablo III console launch in September. With the Reaper of Souls Expansion coming to the PC and PS4 in 2014, he noted that Blizzard would be revealing more details about the expansion at BlizzCon.


World of Warcraft
As of September 30, 2013, World of Warcraft remains the #1 subscription-based MMORPG, with approximately 7.6 million subscribers. That represents a drop of just 100,000 subscribers from the end of Q2, with subscriptions nearly stable. That is good news for Blizzard, since the game had lost nearly 2 million subscribers total during the first two quarters of this year. Mr. Morhaime noted that there has been "increased engagement" since the 5.4 Siege of Orgrimmar patch landed for the game. Blizzard is continuing to invest heavily in World of Warcraft, with "significant and exciting new content" for the game coming in 2014.


Hearthstone
Hearthstone went into high gear during the third quarter, Mr. Morhaime said. "We've seen a great response from the community with the closed beta test, which kicked off in August. Hearthstone quickly became one of the most popular streaming games on Twitch, and we have been expanding the beta test to encompass more regions, and a wider group of players. We're continuing to work on polishing the game as we drive towards open beta testing."

It looks like the release of Hearthstone has been quietly pushed back to 2014, despite the confident prediction that the game would be released in 2013 when Blizzard's Rob Pardo unveiled it in March. Hearthstone is now listed as one of the products in the pipeline that Blizzard has announced for a release in 2014. Given that the game is still in closed beta, less than 8 weeks from the end of the year, that is not a big surprise. 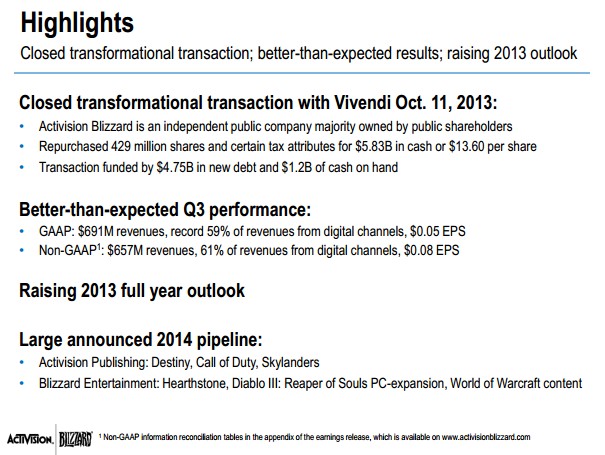 StarCraft II
The only mention of StarCraft II was a sales note: In North America, StarCraft II: Heart of the Swarm was the #1 PC game for the first nine months of 2013, based on data from NPD Group.


Heroes of the Storm
The game formerly known as Blizzard All-Stars has gone through "an extensive internal test" over the past several months, according to Mr. Morhaime. The game will be showcased at BlizzCon, and is now described as Blizzard's take on "free-to-play hero brawlers".


BlizzCon 2013
Mr. Morhaime stated that BlizzCon 2013 was "another sold out show, with more than 20,000 attendees coming to Anaheim from more than 40 countries." The major sport spectacles there include the World of Warcraft Arena Invitational, and the global grand finals of the StarCraft II Championship Series. There will be plenty of announcements and news over this weekend from Anaheim. Here at Diablo Somepage, we'll cover all the Diablo III news in-depth, along with highlights of Blizzard's other franchises from BlizzCon.
Recent News
Diablo III: Ultimate Evil Edition
The console Diablo III edition includes all of the Reaper of Souls content, and special social features!
PlayStation 3