A step towards the expansion beta, and the Loot 2.0 patch 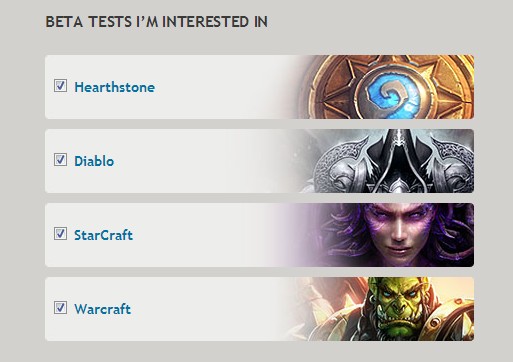 The upcoming Reaper of Souls Expansion looms large on the horizon, with Diablo III players looking for any sign of a beta test for the expansion. While Josh Mosqueira has stated that he would like to see the Reaper of Souls beta start sometime this year, we haven't heard much more since. The latest tantalizing tidbit comes from the Battle.net Beta Profile Settings, where you can choose which Blizzard game beta tests you are interested in. The image for the Diablo beta test has changed, from the regular Diablo III-style graphic to the Reaper of Souls image, as seen above. (The online image used for the beta opt-in also includes a fifth game, not yet displayed on the website: the action real-time strategy game Heroes of the Storm, which will be re-introduced at BlizzCon.)

A patch is scheduled for some time in between Blizzcon and Loot 2.0.

Clarification: We've no additional patches planned before the pre-expansion patch (which will include Loot 2.0 and Paragon 2.0, plus a variety of other system changes and tuning). There isn't a date set for that yet, mostly because it's still under development. Reaper of Souls isn't scheduled to release until 2014, though, and our pre-expansion patches typically hit between 2 weeks to 2 months before -- so that should help give you a better time frame.
Posted by: Khyras11/01/2013 12:39 PM

What about the PTR?

We're definitely looking forward to providing a PTR, but don't have a set date for that either. Once we do, you can be sure that we'll announce it (you know, as we do).
Will the skill tuning in recent datamining be coming into the pre-expansion patch?
such as Battle Rage - Into the Fray, Shadow Power - Gloom, and etc.

That's currently the plan, yup. Just keep in mind that datamined information isn't considered final and may actually change quite a bit before making its way into a public build. :)

There are many other changes happening on the battle.net website, both for the Diablo III expansion, and the many other games that will be shown at BlizzCon. There is a new Battle.net Shop now in beta, making it easier to buy Blizzard games and services. Other changes include tweaks to the forums, including updates to the history of user's posts.

We'll know much more about all of this in less than a week, when BlizzCon 2013 kicks off!
Recent News
Diablo III: Ultimate Evil Edition
The console Diablo III edition includes all of the Reaper of Souls content, and special social features!
PlayStation 3