More background on the layout and design of the city of Westmarch, in the expansion

The Diablo III designers and developers are back with more info, giving a look at the work that went into creating the city of Westmarch. That area is the first zone in the Reaper of Souls Expansion, and has a very different design than the areas found in the base Diablo III game.

In another tidbit about the areas in the expansion, Lylirra had this to say about the randomness of the layouts:

All zones in Act V will be completely randomized: interior tiles, exterior tiles, events, and even layouts and orientation. Should be fun!

Here are the level design details for Westmarch, along with many new images of the area.
Post by Blizzard (Blue Tracker, Official Forum)

"Of all the world's myriad nations, it is Westmarch that has always fascinated me most." - Deckard Cain, Book of Tyrael

There was a time when Westmarch was a lively, vibrant city. Now, an unnatural chill hangs over the sprawling mass of Gothic architecture, and the unmistakable stench of decay chokes its few remaining survivors.

Take a trip with us through Reaper of Souls' first zone and peer behind the scenes at our design teamâ€™s process in putting together the gloom and eeriness of a city under Death's siege.

When discussing Westmarch, we've often referred to it as the site of a "haunted apocalypse." What was once a bustling metropolis and the military capital of the west has now been reduced to something of a wasteland, its previous grandeur (and population) gutted by Malthael's vile, soul-pillaging minions. The elegant Western European and Gothic themes, upon which this city draws heavily, are now juxtaposed by the stomach-knotting dread that only the Angel of Death and his agents can bring. 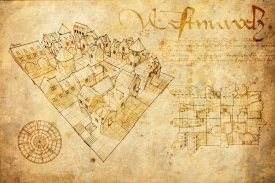 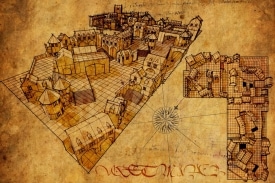 Don't expect Westmarch to be a simple palette of browns, blacks, and grays, though. More than a swatch of colors was considered when crafting this locale. Creating a truly dark and foreboding city requires evoking an emotional atmosphere, and you'll feel the burden of that weight as you brave the dangers wrought by Maltheal's reapers.

The Lay of the Land

Picture the fog-laden cobblestone streets of London in the 1800's, in the midst of England's Gothic revival. The rows upon rows of buildings tightly packed together, occasionally punctuated with small, dilapidated shops and sprawling passageways. The rotting clotheslines hung precariously between shingled rooftops and grimy windows, heavy with freshly-washed laundry. Or the pools of fetid water flooded with animal waste and discarded trash stagnating in neglected gutters and potholes, ideal breeding grounds for unspeakable plague.

That foreboding feeling, a setting where Jack the Ripper or Mr. Hyde might seem perfectly at home, is what you can expect as you navigate the winding, narrow alleyways and broad town squares of Westmarch. Our artists and designers worked to further this sense of dread and doom by leaving visual breadcrumbs of Malthael's presense, covering the city in a blue-green haze and littering its byways with freshly-reaped corpses. To give Westmarch a more worn-torn, apocalyptic feel, they also peppered the landscape with tattered remnants of failed defenses (smashed bulwarks, supply carts, and spiked blockades, for example) and emptied the city of its living denizens, replacing them with animated constructsâ€”all macabre reminders of the slaughter that has occurred.

The inspiration of this Gothic age does not stop there, however. The Survivor's Enclave, the artisan and quest hub for Act V located in the heart of Westmarch, was designed to be a place where the remaining citizens could feel safe as they seek refuge from Malthael's army, and also a location where the nephalem can rest and regroup.

Settled atop a hill overlooking the city, this cathedral square has been modeled after a real world locale in Toledo, Spain. As a densely packed city originally built in the 13th century, its large cloister safeguarded by soaring towers seemed to fit the safe haven tone just right. 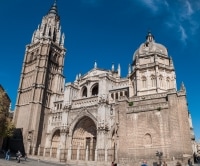 Littered throughout the zone, you'll also find multitudes of randomized sequences we affectionately refer to as "cellars," named after the one-room events scattered throughout Old Tristram in Act I.

This concept of one-room events has been taken to a new level in Reaper of Souls, to the point where you might consider these less like events and more like mini dungeons. One of our artists, Johannes ThÃ©, came up with a new idea on how to chain together multiple types of rooms, which has allowed our designers to create some truly immersive experiences!

Imagine starting in a small house that opens up into a courtyard, where a path guides you through an alleyway to a new house. Not only is this a great way to introduce larger, more interesting story elements, but it's an opportunity to experience Westmarch as though you were actually traveling through it. 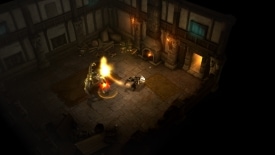 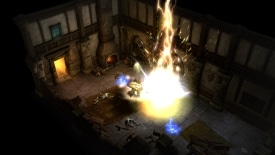 Overall, there are about 30 different cellars, more than in any other zone, scattered throughout Westmarch, each providing more juicy insight to the cityâ€™s history and people (and, of course, luscious loot).

Designing Westmarch did not come without its difficulties, however. The camera system used in Diablo III quickly proved an interesting obstacle when creating an urban feel. Our lead level designer Dave Adams offered some insight on this challenge.

"When we think of cities, even old ones, they are typically filled with tall buildings packed together. We wanted that vibe, but we did not want to have all those buildings fade out in front of the player. It can become very distracting after a while and take away from the gameplay experience."

What then, was the best solution to this issue? The fading of buildings has been reduced by positioning the buildings of Westmarch on opposite sides of the street to the regular camera angle. Roofs, similarly, have been angled away to minimize foreground distractions.

This effect results in the feeling that you are really making your way through a realistic cityscape.

Westmarch has been a challenging delight to explore, design, and implement. With this particular zone, we didnâ€™t just want to set the stage for Reaper of Souls. We wanted to take you to a place of which you have heard only the faintest of whispers, to bring forth from your imagination a legendary location and make it breathe. Through the greatest depths of our artists' and designers' passion, it has been brought to life. . .only to be crushed beneath Malthaelâ€™s advancing legions.

Are you ready to face the horrors that loom around each cobblestoned turn? Prepare yourselves, nephalem: Death awaits you.