Reaper of Souls: History of Westmarch

Delve into the backstory of the city of Westmarch, the first area in 'Reaper of Souls'

The Reaper of Souls Expansion will bring the story of Diablo III into areas of Sanctuary that were not visited in the original game. One of the important regions is Westmarch, an ancient city under attack in the expansion from Malthael. Read on for the backstory of this powerful city, and the mysterious marsh nearby.

"But one must remember that the Westmarch of modern times is vastly different from what it was at the moment of its creation." - Deckard Cain, Book of Tyrael

What first comes to mind when one thinks of Westmarch, the first zone players will encounter in Diablo III's upcoming expansion, Reaper of Souls? From the home base of an eponymous order of knights to an architectural wonder built of monuments to King Rakkis's conquests, it is a city steeped in tales both heroic and bloody.

But what of its founding? Or the secrets that drove King Rakkis to be buried in a fetid swamp rather than his shining capital? It is said that the best preparation for the future is to study the past, so let's take a closer look at these legends as we steel ourselves for the impending destruction and chaos of Malthael, the Angel of Death.

Nearly two and a half centuries past, at a time when the Zakarum faith was quickly gaining momentum, the empire of Kehjistan was beset by a myriad of troubles. From famine and disease to rioting amongst the citizenry, the stage was set for a new faith to rise and stoke the fires of hope in the hearts of the desperate. While many politicians and nobles saw this evangelical traction as a threat, Emperor Tassara, fresh to his rule, realized the teachings of Akarat could be used as a tool to solidify his reputation. By embracing the burgeoning religion, Tassara would hasten the rapid acceptance of the Zakarum doctrines, allowing him to ensure the people would stay devoted to his cause.

The Rise of Rakkis:

Soon after his ascension, competitors for Tassara's throne banded together in an attempt to overthrow the emperor before his position was fully secured. Anticipating this insurrection, Tassara enlisted the help of one of the most zealous Zakarum converts and a skilled military general: Rakkis. The exploits of Rakkis echo through the annals of history, but it is important to note that his undeniable strength and his series of victories to protect the crown were an inspiration to the common folk.

Rakkis's popularity proved a double-edged sword, however, as Tassara began to consider the general a potential threat to his own rule. Thus, he ordered Rakkis to venture west and spread the Zakarum faith through conquest.

As this crusade tore across the land, Rakkis's army faced steep resistance, especially from the nation of Ivgorod and the barbarians of Mount Arreat. Despite these setbacks, Rakkis eventually banded together nine warring clans of the subcontinent under his banner, slowly integrating the Zakarum faith into their culture. This new force allowed him to crush the remaining resistant natives of the south. 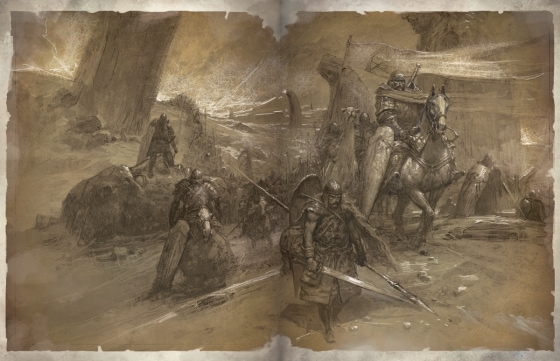 Rakkis' army marches forth after a victorious battle.

Soon, it came time for the general to claim proof of his deeds. To this end, he declared the land he seized Westmarch, in honor of the task to which Tassara had assigned him. Its capital, which would share the same name, was settled as a river port, and its convenient proximity to the sea allowed the city to quickly flourish into the mighty martial and mercantile power it is today.

The City Under Siege

Westmarch enjoyed many decades of peace and prosperity, as few would dare the wrath of its intimidating military. Those who did, such as Khandurasâ€™s ill-fated invasion during the Darkening of Tristram, were slaughtered, with few survivors left to tell of their decimation. In the two hundred plus years since Westmarchâ€™s founding, no outside force would visit harm upon those within the cityâ€™s formidable walls, until the arrival of Malthael, intent on slaughtering the entire population of the capital for an as yet undetermined purpose.

This begs the question: Why Westmarch? What secrets does the city hold that would lure the Angel of Death to its doorstep?

Generally speaking, if one were to carve a vast nation from the wilderness, the least appealing location to build one's new home would be next to a sprawl of fetid marshes. Yet, that is precisely what Rakkis did when he chose the location for his nationâ€™s capital. Was there an ulterior motive? Surely there must have been, as the site would later draw forth the interest of not one, but two independent members of the Angiris Council.

Near Westmarch lay a treasure far more valuable than anything Rakkis had procured during his campaign. After his coronation, the king spent many years of his reign wandering the cyclopean ruins that lay forgotten beneath the adjacent marsh. At his behest, King Rakkis was laid to rest within it after his death. It was whispered by some that the ruins were not those of just any civilization, but rather, a lost city of the Nephalem. 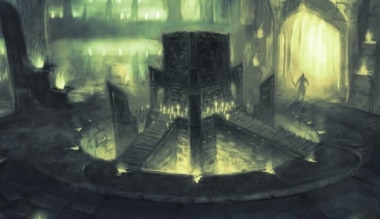 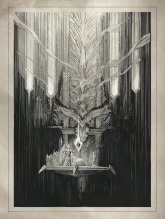 Left: A curious adventurer explores the Nephalem ruins. Right: The Angiris Council discuss the fate of the Black Soulstone.

This location holds undeniable power, and few have managed to pry secrets from its ancient corridors. The greatest quality the lost city is said to possess, however, is remarkable warding against the trespass of both angels and demons. Mentions of this warding were well hidden, but the new mortal Aspect of Wisdom, Tyrael, learned of the ancient protection in a time of great need. Seeking a place of refuge on Sanctuary for the Black Soulstone, he planned on using these ruins to hide the terrible artifact, shielding it from both demonic and angelic intervention alike. With power of the Prime Evil stored within the stoneâ€™s murky facets, not even the High Heavens could be trusted with its safekeeping.

Unfortunately, no one, not even Tyrael himself, could have foreseen the adversary who would pluck the Black Soulstone from its refuge...

Like Tyrael, Malthael had undergone a transformation, and his new incarnation as Death allowed him to cross the threshold of the ruined city unhindered.

The Future of Westmarch

Now, dangers beyond imagining threaten to lay waste to Westmarch, and only you, brave Nephalem, can save the historic city from ruin. Its residents are being culled and raised as an undead army bent on serving Malthealâ€™s every whim. How will you help cleanse Westmarch of the evil thatâ€™s befallen it? What unknown horrors do you imagine wait to stop you?

Let us know in the comments below, and remember: Be careful what you wish for!