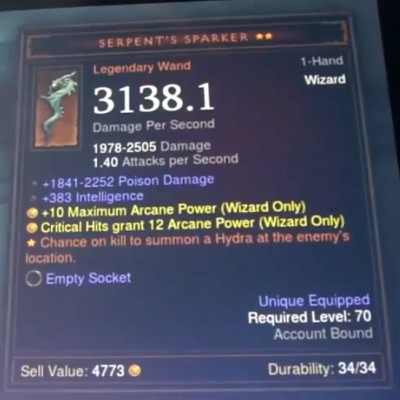 Diablo III developer Travis Day confirmed that character ladders will be added to Diablo III in the Reaper of Souls expansion, in one of the many recent posts on the battle.net forums. Along with other Blizzard Blues posts, he delved into exactly how the Paragon 2.0 system will work, and the sort of game-changing legendary items that players can expect in the future.

Build Changing Legendaries
One lengthy post by Travis Day covered the type of legendary items that will be coming in the Loot 2.0 revamp, and within the expansion. The Serpent's Sparker legendary weapon was shown in the gamescom presentation (pictured above), and Day stated that the legendary effect on that item has changed. He also noted that elemental damage types will have effects associated with them, which is a huge change to weapon damage within Diablo III.
Post by Blizzard (Blue Tracker, Official Forum)
Hello folks,

So first I want to touch on the Serpent's Sparker really quick. The item that people saw screen shots of at Gamescon was not a final version of the item, that item was changed to be "Allows you to have 1 additional Hydra active".

One of the most important things about expansion legendary effects is that, as much as possible, they are designed to change how players interact with the game. That could mean they make a skill you don't currently use something you want to use, you interact with the environment in a different way, you interact with monsters in a different way etc. An example of this is one of the legendaries we added recently gives players a speed boost every time they destroy something (barrels, barriers, etc) suddenly you find yourself wanting to break random crates you may have ignored previously.

Jawbreaker was another example people saw at Gamescon, it makes your Dashing Strike free when you hit a target more than 25 yards away. When people get their hands on the new and improved version of Dashing Strike I suspect they will appreciate how awesome that effect is ;)

There will also be some items that exist just because they are cool. For example The Cow King's Halberd is one that I made just because I wanted to make something that captured a really cool element from D2. It deal's lightning damage (and yes elemental damage types have effects associated with them now) because it's a nod to the Cow King himself and also has a chance to summon a herd of murderous cows to fight with you. That effect isn't really changing any gameplay... but cmon it's just awesome!

There is still a tremendous amount of work from now til the expansion releases and we are still coming up with and implementing awesome ideas on a daily basis. Given the philosophy point I listed above I would love to hear what kind of cool things you guys would like to see. Things that change your gameplay, big or small, and class agnostic things are the best. For example "Knockback skills now deal more damage and knock targets back further". That is an effect that opens up build possibilities for more than one class and gets people thinking about how a single item can change the way you interact with the game or what skills you want to use.

Paragon and Ladder Seasons
Day also gave some answers about the Paragon 2.0 system, and how that will interact with the ladder seasons coming in Reaper of Souls. All the Paragon experience that is obtained by characters on a ladder, will be rolled over into the non-ladder Paragon experience, when a ladder season ends.
Post by Blizzard (Blue Tracker, Official Forum)
Posted by: pandaforest09/12/2013 05:44 PM

I bet you start ladder with paragon 0 and your ladder exp is added to your non-ladder exp in the event of a reset. That's my hope at least

That is currently the plan. Paragon experience will be account but will also be broken out by game play mode. Players who play in Hardcore will have a separate hardcore paragon level from their non hardcore characters.

This is all still a work in progress and subject to change but that is what we are currently intending.

Paragon and Hardcore
The details of how Paragon 2.0 will work with hardcore characters, was covered by a couple other posts. Since the Paragon revamp is still under development, it isn't set in stone. The developers are leaning towards letting hardcore Paragon experience stay on the account, even when the hardcore character dies who had gained that experience.
Post by Blizzard (Blue Tracker, Official Forum)
Hey folks,

I'm here to answer some questions about Paragon 2.0.

The intent of account wide paragon is to reward the player, not the specific character. Paragon experience and levels are fun to earn, but they currently have the draw back of making people feel tied to a specific character. We want to let players play the game however they want when possible and this was one case where we felt the right thing to do was let you play any character you want and have them all work towards the same rewards.

In the case of spending paragon points, if you are paragon level 50, you will have 50 points to spend in the assorted categories. Each character that has access to this pool of points will get to allocate them for that character. So your barbs 50 points can be allocated differently than your wizards 50 points.

Lastly yes paragon levels do not have a cap. The amount of experience required to gain a paragon level increases every time you earn a new one so progress becomes slower the higher you are, but if you theoretically played all day every day for the next 10 years you would still be earning paragon experience.

Hope this helps clear up the air about the new system.


Post by Blizzard (Blue Tracker, Official Forum)
I see this question popping up in several places, including my email inbox from coworkers so I thought I'd chime in.

When the Paragon 2.0 system is released our current plan is to take all the experience players have currently accumulated and sum that into a single value, well two values really, HC and non HC. If you have 5 paragon level 100 characters on your account in soft core that we will add that total experience earned into a single value and your soft core paragon level will be equal to whatever that amount of experience translates to into levels.

The current plan is to do the same thing with all of your hc characters. We are still discussing what we do with dead vs active characters but I'm leaning towards including experience of dead hc heroes as well.

The purpose of the paragon 2.0 system is the reward players who want to invest lots of time as opposed to specific characters. Under that philosophy I don't see any reason to deny hc players experience they previously earned.

Datamining Reaper of Souls Info
A very early build of the Reaper of Souls client has been downloaded and datamined by some websites. Lylirra talked about how that sort of thing can happen, since Blizzard puts up the client on a PTR for their own testing.
Post by Blizzard (Blue Tracker, Official Forum)
Posted by: Archangel09/12/2013 06:39 PM

Blizzard employees are currently testing various aspects of Reapers of Souls, and some of those elements appeared on a PTR as part of that. This was intended (in order to make those elements available for testing, they also became datamine-able).

Information taken from the PTR is not final, though, and we encourage everyone to keep that in mind when reviewing datamined content--and also to be mindful to avoid potential spoilers! While we're not going to be commenting specifically on any discussions regarding datamined info (as it is often not reflective of the final product), we'll definitely be updating the community and sharing more delicious details as development of ROS progresses and features start getting locked down. :)
Posted by: evilrayman09/12/2013 05:55 PM

Where is the PTR ?

We're currently only conducting internal testing right now with employees, but we're using PTR functionality to help facilitate it. By making the game build available for testing, this also made it available for datamining.

While we certainly want to give players the opportunity to test out these changes before they go live and provide feedback, we don't have any details to share right now regarding a public PTR (yes, that's redundant, I know :P) or Reaper of Souls beta.

Loot 2.0 Patch
Lylirra also clarified for a player who thought that somehow, the Loot 2.0 patch was going to be released this Tuesday. That sort of patch will take much testing on a public PTR, and there will be a lot of information published before it actually gets to the live servers.
Post by Blizzard (Blue Tracker, Official Forum)
Posted by: tyredude09/11/2013 09:45 AM

I'm not trying to stir up anything , just trying to get a confirmation and some source of info here.I was just playing and someone announced loot 2.0 was gonna go live next Tuesday. If anyone knows for sure this is true , could I please get you to link the source? Thank you in advance
Once we have more information pertaining to Loot 2.0, we'll certainly be sharing it with you, but as the itemization updates are still under development, I can assure you they won't be going live next week. As with any big changes, we intend to discuss them well in advance of when they go live.

Evade on the Console
Grimiku had a couple of posts about the console version of Diablo III, and the fun of the Evade move there.
Post by Blizzard (Blue Tracker, Official Forum)
Thanks! We're glad to hear you're having a great time with Diablo III on the console, and we're really excited about all the stuff we're working on to make it even better.

My only issue is that you cant cancel archon once activated, share the loot that dropped with the party you are in, or view profiles

I'm not sure what you mean about not being able to share the loot with your party. Do you mean that you can't link the item in party chat? Because you can drop items on the ground for fellow party members (as long as they're not account bound) from the item menu or with the quick loot feature. Also, you can view their profiles in the party section of the menu. It's a little buried, but worth finding so you can chat about builds and gear with your fellow adventurers.

The roll feature is awesome .. Dodging and backstepping away from stuff feels so fluid.

I think I use the dodge feature to break things more than I do to actually dodge anything. Anyone else do this?

The current Blizzard blue posts can be seen as soon as they're posted, in our Blue Post Tracker or RSS feeds.
Recent News
Diablo III: Ultimate Evil Edition
The console Diablo III edition includes all of the Reaper of Souls content, and special social features!
PlayStation 3