The book is set for a February 2014 release, and covers the story leading up to the expansion

A new novel has been announced that is set within the Diablo universe. Diablo III: Storm of Light covers the events from the end of the story in Diablo III, through the start of the upcoming Reaper of Souls expansion.

The book is scheduled for release in February 2014, and is written by Nate Kenyon. He is also the author of a previous Diablo novel, the well-received Diablo III: The Order.

Diablo III: Storm of Light has just been announced, so all the details aren't filled in yet at Amazon.com, but it can be pre-ordered there at a discount. For lore hounds who enjoy delving into the backstory of Diablo III, the novel should be a great followup to the soon to be released book Diablo III: Book of Tyrael. Here's the official announcement for the novel:

"To be Horadrim is to put the lives of others before your own."

Last month, we offered players a first glimpse at the upcoming Diablo III: Book of Tyrael, and today we're thrilled to announce the next novel in the Diablo series, Storm of Light!

Written by Nate Kenyon, author of The Order, Storm of Light is a bridge between the events of Diablo III and the story that is to come in its first expansion, Reaper of Souls. This new novel features Jacob and Shanar from the Sword of Justice comic series and is now available for pre-order at Simon and Schuster.

Read on to find out what momentous events lie ahead in lastest addition to the Diablo universe! 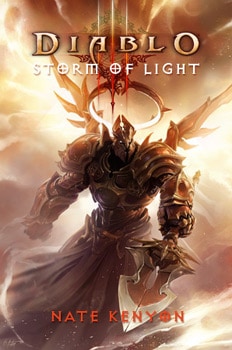 The High Heavens are healing after the fall of the Prime Evil. The Angiris Council has recovered the Black Soulstone and now stands vigil over the cursed artifact deep within the glimmering Silver City.

Amid these momentous events, Tyrael struggles with his position as the new Aspect of Wisdom, feeling out of place as a mortal among his angelic brethren and doubting his ability to fully embody his role. As he searches within himself and the Heavens for reassurance, he senses the Black Soulstone's grim influence on his home. Where harmony of light and sound once reigned, a mounting discord is threatening to shroud the realm in darkness. Imperius and the other archangels vehemently oppose moving or destroying the crystal, leading Tyrael to put Heaven's fate in the hands of humankindâ€¦.

Drawing powerful humans to his side from the far ends of Sanctuary, Tyrael reforges the ancient Horadrim and charges the order with an impossible task: to steal the soulstone from the heart of Heaven. Among the champions entrusted with this burden are Jacob of Staalbreak, former avatar of Justice and guardian of the angelic blade El'druin; Shanar, a wizard with phenomenal powers; Mikulov, a lithe and reverent monk; Gynvir, a fearless and battle-hardened barbarian; and Zayl, a mysterious necromancer. With time and the forces of both good and evil against them, can these heroes unite as one and complete their perilous mission before the Heavens fall to ruin?

Be among the first to find out what happens to our heroes and pre-order your copy of Storm of Light at Simon and Schuster today.

If you're looking to get caught-up with all of the books that take place in the world of Diablo, we'd also recommend checking out this complete listing of the Diablo books in chronological order.

So get to reading, and prepare for the return of Tyrael and the new Horadrim!


Tyrael and the Horadrim
Vaeflare also had a discussion regarding the story of Diablo III, and the many books and novels written about it. The remaking of the Horadrim by Tyrael is a big part of the story that will be told, in both Diablo III: Storm of Light and the Reaper of Souls expansion.
Post by Blizzard (Blue Tracker, Official Forum)
"But hey who cares about the story, let's just retcon a few more things like we did with Aidan and his brother, oh and bring old names like we did with Skeleton King and The Butcher, let's do that to our new expansion and enforce even more nostalgia. That totally worked with D3, let's do this again."
Also, inb4 Crusader is in fact a Horadrim.
If you're curious about recent Diablo lore and are legitimately interested in the answers to the questions you seek, I would highly recommend you check out some of our recent literary offerings, especially The Order, Sword of Justice, and the upcoming Diablo III: Book of Tyrael. Many of your questions will be answered there, though there is certainly more to come. ;)
Posted by: DoomRandom09/01/2013 08:08 PM

Just an FYI, keep in mind that the Horadrim were not a nation or civilization: They were an order of mages/warriors from all over Sanctuary. Cain was the last member of the PRE-EXISTING Horadrim Order. An Order does not go away unless it is completely and officially disbanded. Therefore, there cannot technically be the last of anything unless Cain was quite literally the only Horadrim left following the dissolution of the Horadrim Order (Which did not happen, the Order in and of itself still existed/exists, it was just down to one member)
You're very close. When Cain died, the Horadric Order did indeed die with his passing, but there's more!

In the continuing story revealed in Storm of Light and the events of Reaper of Souls, we find out that after the events of Diablo III, Tyrael himself revived the Order in order to help him safeguard Sanctuary and deal with the Black Soulstone.
Posted by: Matius09/11/2013 01:57 PM

So the Black Soulstone was stolen from Heaven? And Tyrael lost it almost instantly. Oh Tyrael, Imperius will devastate you this time :D
Well Tyrael didn't have a good option for the Black Soulstone. Since it's a man-made construct, he didn't know if he could destroy it, so he opted to hide it somewhere far away from both angels and demons.

Unfortunately, it didn't stay hidden for long.
After aiding in the battle against the new Prime Evil, i'd assume Tyrael would be able to call in a few recruits. And before you pull the 'but only the nephalem was at the battle', remember that there's also Bastion's Keep, where you were congratulated by every other person you saw.

Plus, it's easy seeing these new Horadrim guys aren't exactly masters at combat. They barely last 7 seconds.
To be fair, the Horadrim shown in the Reaper of Souls cinematic trailer were brave enough to stand against Death himself, and at least one got away in time to carry out Tyrael's message.
Posted by: Matius09/11/2013 03:31 PM

Well Tyrael didn't have a good option for the Black Soulstone. Since it's a man-made construct, he didn't know if he could destroy it, so he opted to hide it somewhere far away from both angels and demons.

Tyrael wanted good but it came out as always :)

But to be serious, it won't probably be explained in the game so you could tell us now Vaeflare, How did Malthael found the hiding location? does he have allied Angels that are helping him or was he in disguise while spying on Tyrael?
That's a question I can't really answer here, but you may very well find the answers you seek in time within Reaper of Souls. :)
Posted by: Wesker09/11/2013 04:35 PM

Well Tyrael didn't have a good option for the Black Soulstone. Since it's a man-made construct, he didn't know if he could destroy it, so he opted to hide it somewhere far away from both angels and demons.

Why is it that Tyrael didn't think of destroying the Black Soulstone on the Hell Forge?
I'm sure he considered a lot of options, but the thing is, because the Black Soulstone is different than the soulstones of the past (like Mephisto's), and because it's a man-made construct, Tyrael wasn't sure what would happen if he tried to destroy it. Who knows what might happen if he attempted to do so? No one knows and such an attempt could prove to be catastrophic.

Therefore, he felt that the best and safest course of action was to keep the Great Evils locked within the Black Soulstone, and then hide it away from the influence of both angels and demons.

Now there are other dimensions that angels and demons created with the Worldstone, certainly. They're not really the sorts of places you'd want to go on vacation, though. Most of them are rather sad, empty places, and they are still the realms of the angelic or demonic faction that created that particular dimension.

The only truly neutral dimensions are Sanctuary and Pandemonium, but Pandemonium still has demons and angels in it, and Tyrael's mortal allies (the new Horadrim) wouldn't have been able to help him hide or guard the Black Soulstone in Pandemonium. As such, Tyrael believed that hiding it on Sanctuary was the best course of action out of the limited options available to him.
Posted by: Abolist09/11/2013 04:16 PM

It would be kinda cool if you put the lore of the game IN THE GAME.
It's in there, and you can totally enjoy Reaper of Souls without having read the book. :)

Didn't anyone notice that in the RoS trailer, during the sketched animation near the beginning where it shows the black stone on the ground and the angels are surrounding it. I counted 4 angels. And since tyrael is mortal, that makes me think that the one high up above them all could be malthael.
Malthael isn't seen in that particular scene, but that's Itherael on the left and Imperius on the right. :)
Posted by: Keltest08/27/2013 02:23 PM

Didn't the Crusader's bio say he was a Zakarum? Need to double check that now...

Yes. Its my understanding that the Crusaders are the Elite paladins.
Historically, the Crusader and the Paladin share the same origins, yes, but there's more than that.

The Paladins headed west under the order formed by Rakkis seeking conquest, but the Crusaders headed east on a mission to find a way to cleanse the corruption blighting their Zakarum faith.

These Crusaders were an wholly different breed of holy warrior. They're more edgy, and much more zealots of their faith. On the whole, they are a group of men and women chosen not only for their prowess and cunning on the battlefield, but also for their uncompromising and unyielding dedication to the Light.
Recent News
Diablo III: Ultimate Evil Edition
The console Diablo III edition includes all of the Reaper of Souls content, and special social features!
PlayStation 3