An interview with Josh Mosqueira and KingKongor covers Enchanting, Paragon 2.0, Followers, and more 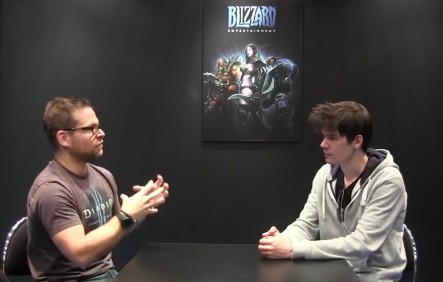 The Reaper of Souls Diablo III expansion will bring major improvements to the battle.net connectivity and chat system, according to game director Josh Mosqueira. In an interview with streamer KingKongor, Mosqueira discussed topics including the new Paragon 2.0 system, how Enchanting will work, and a special NPC that players will meet in Act V. Some specific topics aren't being discussed by the Diablo III developers right now, but will be revealed at BlizzCon this November. They discussed multiple features from the expansion, and also those being added in the Loot 2.0 patch.

Interview Topics
Here's an overview of the topics covered in the interview. Select any of these topics to jump directly to that section of the full interview transcript:

Jump past the break to read the full transcript of the developer interview, or watch the video.


Diablo III Developer Interview
KingKongor at gamescom 2013
Rune Words
Q: Where are the rune words?
Josh Mosqueira: That's a sort of new question. We felt when we released D3, a lot of the things we've done especially with the gems and runes; the runes became your rune words, we found it very interesting to tie them into the skill system.

Chat System Improvements
Q: Will the chat system improve, and have more features like Diablo II had with rooms, and special avatars?
Josh Mosqueira: Absolutely. That is one of the things that we're not currently ready to reveal. But we definitely have plans that will really improve the connectivity, the online experience. That has been one of the big focuses of Reaper of Souls. So come to BlizzCon, there will be some surprises.

New Follower?
Q: Is there going to be a new follower?
Josh Mosqueira: No, we thought about that. But then we looked at the followers we currently have, and we realized we could probably do more with the followers we have, and make them feel like part of the story. So we decided instead of adding a new follower, that we'd take the existing followers and really go deep with them. One of the things you guys can expect when you play Act V is that each of the followers have their own little side quests. So you'll learn more about some of the followers, and in fact you will get to meet the Scoundrel's brother.

PVP
Q: Is there going to be the arena, maybe some kind of way to balance PVP with gear and skills?
Josh Mosqueira: The whole PVP question is - the day that we have something to announce, is going to be a really awesome day, for you guys, for us, for everyone. But until that day comes, the team right now is first of all focused on getting Reaper out. But we're also really exploring the right expression for PVP in Diablo. It is one of those things that at the surface seems like - what you said makes a lot of sense - but it's actually a very complicated design problem. We have some experiments, we've been thinking about it. But right now the focus is getting Reaper, and Loot 2.0, and all the great things we have packed into Reaper of Souls, out first.

Adding Sockets
Q: Will there ever be a method to add sockets to your gear?
Josh Mosqueira: That's one of the things we talked about, and we're still -- the whole Enchanting system is one of the things we're adding, with the Mystic. It's one of those things that keeps coming up in conversations. In a lot of ways the Mystic really feels that role with Enchanting, and being able to reroll any affix, and getting anything else instead. So it's a really cool way, to really customize and tweak those items exactly the way you want them.

Enchanting
Q: And so that's a new artisan...?
Josh Mosqueira: It's the Mystic. The Mystic can do two things: she can transmogrify items - it's gonna be so much fun to finally be able to customize the appearance of your character, without losing or sacrificing any of the power. And enchanting is the other system.


Q: Does enchanting reroll all stats?
Josh Mosqueira: No, you choose the specific stat you want. So if you have a Barbarian, and this awesome legendary drops that has Intelligence and you don't really want Intelligence. So you can select that one stat, pay the crafting cost and the gold cost, and it will choose another one, and then swap them.


Q: That's fantastic; this is going to change a lot of things, makes the currency of items a lot better.
Josh Mosqueira: I think during the whole development over the last year, it was the evolution of the game as we sort of reacting to feedback. The thing that people should keep in mind, is that when we talk about the community, we're part of that community, too. We play this game all the time, there are things about it that drive us nuts as well. But we have to take a sort of long-term approach, and make sure that we're addressing the right things. That's why the whole philosophy around Loot 2.0 is essentially: less drops, more epic, but why? And the reason why is because we want to make playing the game the most fun, the most rewarding, the most satisfying way to get items.

Auction House Changes?
Q: Will there be changes to the AH?
Josh Mosqueira: The Auction House is a really complex element of Diablo. To give you guys some context: we still feel that the original intent behind the Auction House, is still valid and really needed. Trading items is one of the core aspects of what makes Diablo. Like it or not, there's a significant portion of our playerbase who actually attributes real world value to those items. So we have to find a way to allow them trade those items in a safe and secure manner. The territories where we can not have an Auction House, the account compromises are out of whack with the rest of the world. So the AH is definitely fulfilling that role. However, what we really want to make sure happens -- and this is why Loot 2.0, and the whole shift in philosophy -- is because we want to make playing the game the most fun rewarding way to get the items. And if you want to go to the Auction House you can, but we do not want our players to feel like they need to go to the Auction House.

2 Billion Gold Cap
Q: Will the max of 2 billion gold on the Auction House be raised?
Josh Mosqueira: This is part of the whole complex issues, it's not just a design problem, it's not a UI problem, it's sort of a legal and commerce problem. It's something that we have weekly meetings to discuss and it definitely is something that again is really complex. In some ways it's like trying to figure out getting the health care system in the United States; everybody has a different opinion. At the end of the day, we really want to do right by the players. That has always been the primary motivation, making sure that players can trade safely. And then it's just a matter of making the right decisions to help it go in that direction.


Q: I personally do hope the gold cap is raised.
Josh Mosqueira: That is something we talk about quite often.

Paragon 2.0
Q: Since the new Paragon system will have unlimited Paragon Levels, will going from 1 to 100 Paragon Levels be faster?
Josh Mosqueira: That's a good question. We're still tweaking the Paragon curve that we want, so I guess that's a question that come BlizzCon, we'll be able to have a lot more of a definitive answer. Again, we still want Paragon to feel, always be rewarding, and you're getting those points to spend, and be part of your progression. We want to make sure we balance those sort of things together.


Q: It's one Paragon Point per Paragon level, right?
Josh Mosqueira: Currently that is, but these things are in flux right now.


Q: Let's say it stays like that. I know there are a certain amount of points you can get, with Utility, and Core. Right now, Movement Speed has a 25% cap. Will the movement speed cap be changed because of the point system?
Josh Mosqueira: That is a great question, and the only real answer we have at the moment is, we're still in that tuning phase. We're playing the game a lot, trying to figure out the right feel, the right rhythm and pacing for progression. The closer we get to ship, the more we'll stabilize. Of course, we hope to get a lot of really great feedback from the beta when we get to that.

Game Difficulty
Q: Will the game stay hard? Good items are being pumped into the economy, and those items stay forever, so in a way Diablo nerfs itself.
Josh Mosqueira: That's an awesome question, and you should come to BlizzCon.

Another New Class?
Q: Will there be another new class besides Crusader?
Josh Mosqueira: No, there's no second class. That was something we decided early on. We like the clarity of one new villain, one new class; they partner up, they work quite well together. With Reaper of Souls, players are not just getting a new class, and getting a new Act. You're going to be gretting all these great new systems, that will sort of make the end-game really meaningful for everyone. So right now we're really focusing on the Crusader, and Malthael, and Act V. But that's really just the tip of the iceberg when it comes to Reaper of Souls.


Here's the video of the interview. The audio is very faint and often difficult to hear; the transcription was done as clearly as possible from the available audio.