The D3 expansion trailer is rated, and 'The Dark Below' trademark is now verified 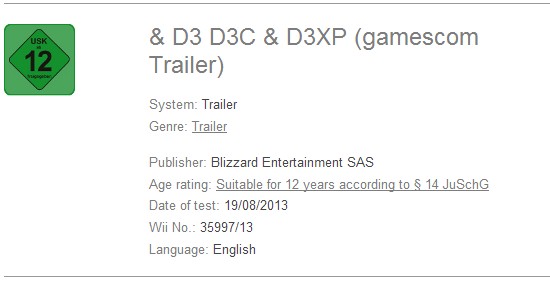 Another title related to Blizzard games is The Dark Below, which was recently rumored to be trademarked by Blizzard Entertainment. The trademark could not be verified at that time, but we can now confirm that Blizzard has indeed trademarked the name in the EU, as a title for a video game or expansion. This is most likely the name of the next World of Warcraft expansion. The WoW expansion may be also announced at gamescom, but most likely it won't be unveiled until BlizzCon 2013 in November.

For tomorrow, the big Blizzard news is the Diablo III announcement. We'll have the details of the D3 expansion, the trailer, and everything else as they are available. Follow us on Facebook, Twitter, or via our RSS news feed for all the latest Diablo III news.
Recent News
Hot Topics