Diablo IIINews'Reaper of Souls' Expansion Trademarked in EU and US

'Reaper of Souls' Expansion Trademarked in EU and US 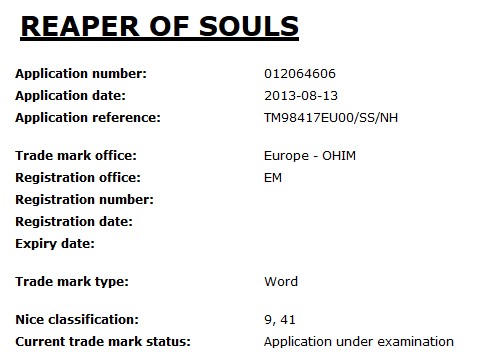 Blizzard Entertainment has applied for a trademark on Reaper of Souls in Europe and the United States, to obtain the legal rights for the likely name of the upcoming Diablo III expansion. The trademark info in Europe and the US is a standard one, similar to the other trademarks that Blizzard has obtained for their computer games and expansions.

It is expected that this trademark would be showing up, as the initial teaser info about the Reaper of Souls stated that Blizzard had trademarked the title.

As seen in the European application, the classifications for the requested trademark are 9 and 41, which is standard for these type of video games. The descriptions listed are:


The big official Diablo III announcement is coming up on August 21 at gamescon, and is most likely about Reaper of Souls as the first Diablo III expansion. We'll report on all the Diablo III news from gamescon, so check back for that. Follow us on Facebook, Twitter, or via our RSS news feed for the latest Diablo III news.