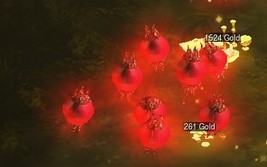 Diablo III developer Wyatt Cheng once again delved into the issue about combat pacing in Diablo III, and how characters replenish health so quickly in the current game, versus the damage that monsters do. In a reddit thread, he provided insight into the current questions that the developers have about the topic. This continues previous musings that Cheng has provided publicly about the issue, both in a Twitch.tv interview, and in his GDC 2013 talk.

In this thread, Cheng dug into issues surrounding the current high Effective Health Pools (EHP) that can be obtained, but also the one-shot deaths that can happen in Diablo III when fighting tough monsters.

Posts by Wyatt Cheng
This is a great discussion. Good OP post and good analysis.

I agree that if we cut incoming damage and healing rates in half, players would run with half as much EHP, like you predict. So we can't just go in there, make that change, and expect everything to be okay. I like the way you broke things into EHP and Sustain, it's a good way to look at the problem.

I think that framework also hints at a potential solution too. We need to look at ways to test both your character's Sustainability as well as your EHP. Melee classes already experience a good deal of this, which is why they were the first to adopt Life On Hit when the game first came out. As a melee class you are constantly taking melee damage from enemies, so your sustain is tested every second.

Right now we don't have many ways to stress the EHP of the ranged classes without it feeling bursty. I think this is because the game has an plethora of "Do the right thing and take 0 damage, do the wrong thing and take 100K damage". Since the outcomes are so binary, the correct way to build a ranged class is to try to do the right thing as often as you can, and maybe build enough survivability so you can make a mistake once in a while. What I think we need more of is "Do the right thing and take 20K damage, do the wrong thing and take 80K damage". You're still trying to do the right thing, but you're still taking damage either way. Besides, Sanctuary is a dangerous, violent and hazardous place - some amount of damage comes with the territory. When I play, I want to feel stress on my EHP and my Sustainability while still feeling satisfied for making smart plays. I also want to value incremental survivability choices I make on my gear and my skill build.

P.S. LpSS scales with attack speed too since you get more attacks per second which translates into more spirit generation.

Assuming the person has some life regen of some sort, wouldn't both situations be almost the same in terms of binary life-or-death circumstances? Under current circumstances, the 20k life would be healed within a second on a high-end DH with gloom up. 80k damage would usually kill the hero outright. Isn't this the spike damage that you are trying to avoid?

Good question regarding the 100K vs. 20K/80K scenario. I think I skipped a step in my answer which was assuming the player had about 100K EHP.

Let's take it into some more concrete numbers. Let's say a Demon Hunter has 30K health and regenerates 20K health per second via Gloom or what have you. In that world, a 30K hit kills you instantly.

Let's take a mechanic like Mortar. Suppose at the MP level you're playing at, Mortars hit for 30K. As a Demon Hunter you have 2 choices, you can either plan on avoiding all Mortars perfectly, and then you don't die. Or you can gear for either 35K basically you're allowing yourself some "slush". How you gear depends on your confidence in your ability to avoid those Mortars, and how sensitive you are to death.

If you gear for 30K or less, then you are going to feel like the game is really cheap and unfair when you do die, because when those mortars hit you that you had planned on avoiding, you go from full to dead instantly. (Side note, this contributes to Vortex feeling cheap. It's not that Vortex kills you directly, but Vortex causes you to take damage from something you had previously planned on avoiding completely, because you know it kills you).

On the other hand, if you gear for 35K health, then the game went from threatening to super-easy-mode, because the mortars are flying at you once every 2 seconds, and you heal to full in 1.5 seconds, now the mortars never actually kill you. In fact, you might not even bother dodging them anymore.

Now enter the "half-damage and half-healing". Instead of healing for 20K health per second, I heal for 10K health per second. But instead of taking 30K damage, I take 15K damage. In the absence of any other changes, I think we'd see exactly what you predict. The game didn't become interesting, instead, I'm just going to gear with 15K health.

However, what if the way in which we cut Mortar damage wasn't just a strict 50% cut. What if we took the 30K damage and made it "0 damage if you avoid the Mortar by 20 yards, 5K damage if there is a Nearby Hit of about 8 yards, and 25K damage if you are hit directly".

Now as a player I can't reliably plan on avoiding all the Mortar hits. If I want to play super-duper safe I can avoid all the mortars, but I'm probably running a ton and doing almost no damage. Realistically I'm probably going to take 5K "incidental damage" constantly. This is going to eat into my 10K healing per second. If I take a 25K hit that leaves me at 5K health, I'm scared but not dead. Over the next 5 seconds I can't afford to take another direct hit, and can either play super conservatively to avoid even 5K hits, or I can play more aggressively and accept that my 10K regen per second is being partially counteracted by the 5K near-hits and just make a concerted effort to avoid any more direct hits until my health is back up to a comfortable range. You're right this would be a significant shift in the environment, which is why you haven't seen such a change.

Note: I'm not actually saying we're going to change anything with Mortar. I'm just using it for illustrative purposes because I think it's a good example for people to wrap their minds around right now.

So basically, you're trying to do three things at once(correct me if I'm wrong).
1. Cut healing mechanisms by a large margin
2. Keep incoming damage high if you ignore mechanics, and thus more punishing due to point #1.
3. Make incoming damage far lower, yet consistent, for heros if they navigate the mechanics correctly.

Lifesteal is another issue, and is currently too good.

The broad statement of "cut incoming damage in half, and cut healing in half" is breaking down at the level of detail we're examining. Your 3 summary points are more accurate. The exact amounts would be much more finely calibrated.

I'll reiterate, there's no concrete path to get to a goal, but I think it's worth discussing whether that goal is a worthy one. Specifically, what advantages does it have for the fun-factor of the game if healing is less, ignored mechanics are still punishing, but there is far lower yet consistent damage for heroes who navigate the mechanics correctly (the three points you mentioned). Rather then asking whether 50% is the correct tuning number, what are the goals that correct tuning would achieve? I tend to think there would be numerous advantages but I'd like to hear what other's think.


Other posts look at how health is regained Diablo III, whether it's through passive regeneration and health globes, or gearing for stats such as Life on Hit, Life per Spirit Spent (LpSS), or Lifesteal.

Posts by Wyatt Cheng
I think buffing the numbers on things like LpSS and Life Regen is reasonable. I lean more towards LpSS.

Passive Life regen is good for allowing you to withstand some amount of damage over time, but when things go wrong and I'm close to death then my response is to back off and run in circles or run away until my regen has time to kick in. If I become overly reliant on this, then I may find myself running away a lot. This is not universally a bad thing, but it's bad if it happens too much or it becomes the dominant way in which I play my Monk or Barbarian. (Ranged classes don't suffer from this as much because they have tools to continue doing damage while minimizing how much damage they take)

If we were to buff LpSS instead, then when I'm low on life I still want to play carefully and conservatively but I still want to engage monsters, generate spirit, and then spend it to heal myself. I think LpSS has the potential to be a great stat, but the current tuning numbers are too low to be competitive in today's environment. I think Life for Fury Spent could be tuned to be attractive as well. If I were low on Life (and healing were harder to come by then it is now), it would encourage me to do things that generated Fury and then spend that fury to heal myself.


One of the cases I think health globes break down the most right now is when I am fighting a large monster. Let's say I'm normally killing a monster every second, and getting a health globe every 5 seconds (every 5 monsters). The health globes are very comfortably healing me so I'm fine.

Then I come up to a boss, champion, rare, etc. and suddenly I'm health globe starved for 30 seconds. This is enough to kill me. Now I need other sources of healing from my gear or skills.

I don't think this is necessarily a problem, but it happens to a more extreme state right now then I think it needs to. Monsters currently have the ability to drop health globes incrementally as they take damage (ie. drop a globe at 50% health), but we could probably use that more, to try and remove those long periods against very high health targets where you are health globe starved.

Well if you can't depend on health globes for healing when you need them most, wouldn't it make sense, as a player, to instead build around one of the life regen affixes like LS or LoH instead? If LoH or lifesteal are strong enough to cover a 30-second gap in health globes, they'll be way more than enough to sustain yourself through the trash.

It just seems that the inevitable outcome is that health globes become the secondary source of healing instead of the primary source.

Yes. I think your analysis is correct. I think your assessment is why healing from health globes feel marginalized in the current live game at high levels of play.

All this discussion may simply be public rumination; it sounds as if this is still something the developers, and especially Wyatt Cheng, are trying to figure out. But it is possible that the game will receive systematic changes down the road, which would make combat pacing more interesting within Diablo III and better reward tactical maneuvering in combat.
Recent News
Diablo III: Ultimate Evil Edition
The console Diablo III edition includes all of the Reaper of Souls content, and special social features!
PlayStation 3