An interview with Josh Mosqueira, Wyatt Cheng and Travis Day 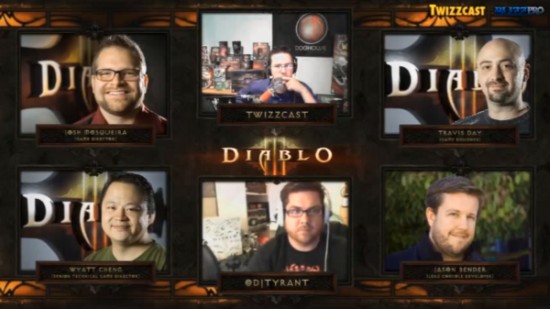 BlizzCon 2013 is going to be exciting event for Diablo fans, Diablo III Game Director Josh Mosqueira stated in a recent interview. On a podcast named TwizzCast, Mosqueira was joined by Diablo III developers Wyatt Cheng and Travis Day. They discussed the console port of Diablo III, and the future of the game overall.

As mentioned in our recent outing to Blizzard for the fansite mixer, there are a lot of interviews planned with the Diablo III developers within the next month. Players shouldn't expect any big new announcements in these interviews. But they do give the thought processes of the developers, both for the future of the game and looking back at the game development so far.

This interview covered much of the same info that we have heard before. There were also different takes on familiar topics, and some new tidbits. Here are the highlights:
These sort of ideas are all part of the massive amount of content that the developers are working on right now. Look for other interviews like this in the next week, and eventually more in-depth information as we get closer to BlizzCon.

Click through for the hour-long video of this podcast interview.