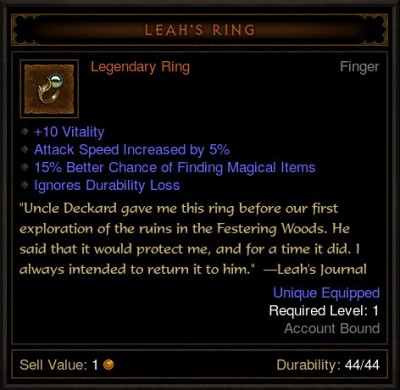 There will not be any Collector's Edition of the console versions of Diablo III, like there was for the PC version. Read on for info on that, and other recent Blizzard Blues posts.

Diablo III PlayStation 3 and Xbox 360 Exclusive Items
As reported previously, the items offered exclusively as part of the Xbox 360 and PlayStation 3 versions of Diablo III were originally not designed in the most useful manner. The initial screenshots had the wrong item levels, and the ones that were listed accurately were often too high level to be of full value to new characters. Some of those items have been redesigned, and their required level lowered down to level 1, as seen for the Leah's Ring item shown above.
Post by Blizzard (Blue Tracker, Official Forum)
Hey there everyone!

I just wanted to jump in to let you know what we've spent some time re-evaluating these items and have updated the Diablo III Console Preorder Bonuses and Exclusives blog with some corrected tooltips.

The required levels on these items are now as follows:


No CE for the Console Diablo III
The Collector's Edition of Diablo III for the PC was a special version with extra features in the box. There won't be any CE edition for the console versions of Diablo III.
Post by Blizzard (Blue Tracker, Official Forum)
Posted by: Superfamicom06/24/2013 12:25 PM

WIll there be a collector's edition for consoles?
We will not be offering a separate collector's edition of the PlayStation 3 or Xbox 360 versions of Diablo III, but we have a variety of preorder bonuses and exclusives available to those who take the fight for Sanctuary to consoles. You can read about them here in this blog.

We have not released any details pertaining to the PlayStation 4 version at this time.

Diablo III Console Controls
Vaeflare provided extra details about the controls and functionality in the console versions of Diablo III.
Post by Blizzard (Blue Tracker, Official Forum)
1. Does the game pause when my friends(local) trying to change his skill or anything?
2. Does stash sharable in local?
3. What are R3/L3 button do?
4. What are D-pad button do?
5. can i pause the game without being attacked by anything?


Playing Across All Acts
Finally, Grimiku discussed the ideas around having an "open world" mode in Diablo III, where characters could move freely between all Acts and areas of the world.
Post by Blizzard (Blue Tracker, Official Forum)
Posted by: Ayranjie06/24/2013 04:23 AM

Just this. If we got to act 2, and we join a fresh act 2 game, we can join any area we've visited prior to that and all bosses are there again.

Wyatt Cheng talked a little bit about making the world of Sanctuary more open in his interview with ArchonTheWizard, but it's to early to have more details on how it would work. I think this all comes back to having more choices in content (something Travis Day talks about), and that's something we're definitely interested in providing more of.
I'll quote Wyatt Cheng in this post so you guys don't have to follow the link I posted earlier.

We've talked about open world, where you can skip story and cinematics. I shouldn't use the word, "talked about". That can be ambiguous, where it can mean "oh it was mentioned" as opposed to, "no, we actually sat down and assessed the production cost, and time, and weighed it against other opportunities." We can't chase everything at once, so we have to look at the 100 things we could do, and pick the ones that we want to do. If we do for example, a no-quest open world mode, then we might not be able to do an alternate monster distribution for an area. That's not an accurate comparison, but we definitely look at all the things that we'd like to do. For alternate distribution, I'll mention that: I would love if I came by an area, and it wasn't always the same monsters. Diablo 2 did some of that, where you came through an area and the distribution was different. It still made sense artistically for the area, but there was a little more variety.

I know a lot of you would like more concrete details on dates, or even a time frame estimate, but I don't have any to share right now. Weâ€™d still prefer to talk about things we're working on as early as possible rather than remaining silent (caveat: I know there are some of you who may disagree with this approach). That said, I think what Wyatt is talking about sounds pretty awesome, and weâ€™ve seen a bunch of posts from the community on this topic. A lot of you mentioned it would be cool if there was a mode where there was an open world mode with no story, and I think it's good for you to know that there are senior developers on the same page.
Recent News
Diablo III: Ultimate Evil Edition
The console Diablo III edition includes all of the Reaper of Souls content, and special social features!
PlayStation 3