Videos of the Diablo III developers at E3, and Blizzard Blues discussions 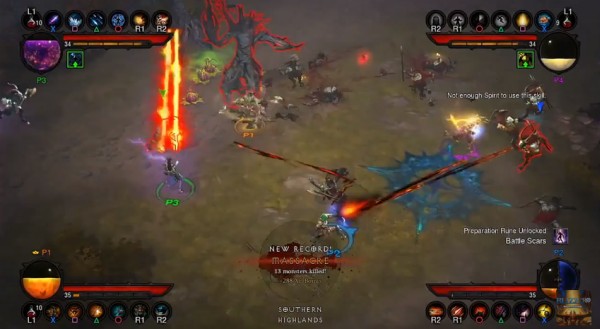 E3 2013 wrapped up last week, and videos are available of the official Diablo III demos interviews, of the developers who were there. The first video is from the official PlayStation demo stream. It features Game Director Josh Mosqueira demoing the PS3 version of Diablo III, with four other people from the Diablo III console team each playing a character in a full multiplayer session (as seen in the screenshot above).


Read on for another E3 video, and recent Blizzard Blues posts.

They mention that loot in the PS3 version of Diablo III is set up so that at high levels, less items will drop, but the ones that do drop are more likely to have stats for the character you're playing. (As detailed in our recent interview, the Xbox 360 Diablo III has the same feature set as the PS3 version, so presumably that will be the same there, as well.) Since there aren't any Auction Houses on the console versions of Diablo III, it is important that players directly get more items dropping that their characters can use. This change is also going to be part of the major itemization overhaul that is coming many months from now for the PC version.

There are a number of Blizzard Blues posts about the console that were answered recently.

PS3 and Xbox 360 Diablo III Characters
Since Diablo III can be played offline on the upcoming console versions, steps can be taken to copy over characters, when going over to a friend's house to play with them. This works slightly differently on the PS3 version of D3 as the Xbox 360 version, and the steps for both were detailed.
Post by Blizzard (Blue Tracker, Official Forum)
On the guest profile that plays along will it use the main profiles characters or will the guest have to make their own?

Curious as to how this will work. And apologies if it's been asked before.
How guests can play with you on same screen co-op varies between the console systems.

On the PlayStation 3, additional players will have access to any saves that any User on the system has; however, only the primary User can unlock trophies during single-system co-op.

On the Xbox 360, if additional players logs in on other profiles, they are able to load their own heroes from their own save files. They can also bring their profile and Diablo III save on a memory unit or memory stick and load it at their friend’s house, or alternatively, they can bring their save file and recover their profile from Xbox LIVE (both Silver and Gold tier accounts can do this). If the player is an Xbox LIVE Gold Tier member and they choose to use Cloud Saving from Microsoft, they can also recover both their profile and their save at their friend’s house. It's important to note that only Gold Tier members can play online with other players over Xbox LIVE, however, Silver and Gold Tier members can play locally and recover profiles.

On the Xbox 360 version, each profile that is playing together can unlock achievements.
As an additional point of clarification, PS3 players that visit a friend's house for some local co-op action will be able to access their own characters from either a save on a USB stick, or by accessing their characters from cloud saves (if they have PlayStation Plus).

How this works is that at their friend’s house, the visiting player would need to create a new local User on the console, then sign into their Sony Entertainment Network (SEN) account with PS+ and pull down their save from cloud storage. They could alternatively bring over their save on a USB stick, but they will still need to create a new local User on the console in order to partake in local co-op with their character(s) from home.
Post by Blizzard (Blue Tracker, Official Forum)
Each player will need a profile in order to play on the Xbox 360 (all of these profiles can be from the same machine, or not). Silver and Gold accounts can download their profile (and character save) from cloud storage, but Silver accounts will need an external storage device to save any progress they make when they're playing on a friends console. Gold accounts will have the additional option of cloud storage to save their characters. I'll have to ask around to make sure that multiple Silver profiles on one machine can save to its hard drive, but I'll update this thread when I find out.

No Beta on Console D3
Not surprisingly, there aren't any beta tests planned for the console versions of Diablo III. Blizzard still isn't talking specifics about the patching frequency or details on the console versions.
Post by Blizzard (Blue Tracker, Official Forum)
Posted by: GenKenobi06/12/2013 12:57 PM

I'm wondering if a blue could confirm (or if its too early) whether or not Diablo 3 for consoles will have the same ability to recieve multiple patches like the PC version? One thing everybody can agree on is Blizzard supports their products and keeps putting out patches for them. Will we be able to get these patches on our home consoles? Oh, will you be having a PS3 beta as well? Thanks!
We don’t have any details just yet concerning the frequency of patch updates for console, but we’re hoping to be able to get important updates to our console players in a timely fashion.

We have no plans for a beta for the PS3 or Xbox 360 version of Diablo III at this time.

Features on the Console Diablo III
The Xbox 360 and PlayStation 3 versions of Diablo III have all the content up to Patch 1.0.7, and some of the changes that were added in Patch 1.0.8 on the PC side.
Post by Blizzard (Blue Tracker, Official Forum)
The console version of Diablo III will ship with everything up to patch 1.0.7 (so that means Paragon levels, Monster Power, Brawling, Infernal Machine, as well as all the minor tweaks and tuning we did to items, systems, and skills). There's also some content from 1.0.8, like the multiplayer bonus -- that will definitely be available, too.

Monster density was custom tailored for the console, so it won't be the same as what's on PC now, but density will increase as you bump up the difficulty in Inferno: http://us.battle.net/d3/en/forum/topic/9281758533#17

Monster Power in Console D3
Lastly, the multiplayer bonuses added in patch 1.0.8 did make it to the console D3. Monster Power is there as well, but in a streamlined fashion.
Post by Blizzard (Blue Tracker, Official Forum)
The multiplayer xp/mf bonus made it into the console version, and is available for local coop and online multiplayer.
Monster density has been custom tailored for the consoles, since the pace of combat is different than the PC counterpart. We wanted to make sure combat flow was smooth and action packed, so you can be sure that we've kept that in mind as we adjusted the density.
Posted by: Zombie06/12/2013 01:54 PM

Let me be more specific: The monster density updates you added in 1.08 JUST for inferno, is that coming to console?

Difficulty levels and Monster Power operate a little differently on console. There will still be Normal, Nightmare, Hell, and Inferno, and completing one mode will unlock the next mode -- just like on PC. Also, within each of these modes players will able to select from different difficulty levels to suit their preferred level of challenge. On console, however, there are only 8 settings: Easy, Medium, Hard, Master I, Master II, Master III, Master IV, and Master V. At Medium and higher in Inferno, density does increase, but the increase won't be as significant as what you'd typically see on PC (due to performance issues). Similar to MP on PC, higher difficulty settings present more powerful enemies that will have opportunity to reward players with more powerful loot.

For perspective, here's the current scaling (note that this may change before we ship):