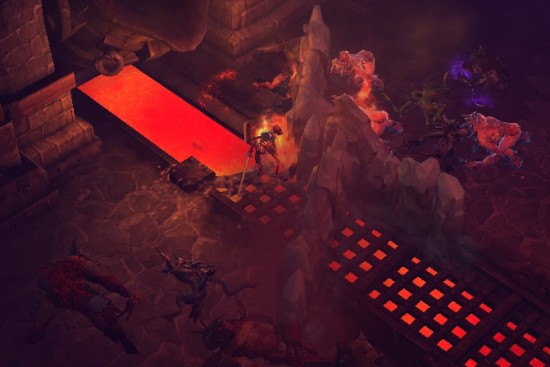 The work is wrapping up for Patch 1.0.8 as it is being finished on the PTR. Blizzard is trying to take care of long-standing bugs before that patch goes live. One issue that has popped up occasionally involves the 'Waller' affix on elite monsters. Elites with that affix put walls around a character, making it hard to move around. The bug comes up when a single wall lands right on top of a character and stops any movement at all, which usually results in the elites killing the character -- this can be seen in the screenshot above, from a forum report.

This bug has been known about for many months, and Blizzard has made fixes in previous patches to try to keep it from happening. There are still sporadic reports of the bug, so Blizzard is asking for more in-depth feedback, to try to get enough information to squash it once and for all.
Post by Blizzard (Blue Tracker, Official Forum)
Hey all,

Thanks so much for your reports. At the moment, our QA team is having difficulty reproducing this bug internally, so we have a small request.

If you're still running into situations where Waller monsters are spawning their walls right on top of your characters, we would really appreciate a list of steps that you took to get this bug to occur or a video that shows when and where this happens. (While we're super thankful for the reports and screenshots you've submitted thus far, we just need some additional details to figure out what's going on.)

For clarity: Waller champions will sometimes spawn multiple walls in a tight formation near a player, which can limit mobility. This is not a bug. However, if a single Waller wall is spawned right on top of a character, causing it to be unable to move, then that's a bug and we would like to know more about these situations.

This doesn't make any sense to me, what's the difference if you're stuck between multiple walls or just stuck in one wall.

In one situation, you have monsters with the Waller affix spawning walls near a character in a tight formation, or adjacent to one another in a way that may limit where your character can go. This is not a bug.

In the other, you have walls being spawned directly on top of a character, which basically makes it unable to move in any direction until it despawns -- and this is regardless of where the other walls may have spawned, too. This is a bug, because walls should not spawn on top of characters.

We made some changes in patch 1.0.7 which we believe should have fixed this, but since we're still getting reports from players, we're continuing to investigate. Right now, we're having trouble replicating the bug on our end, so we're reaching out to players for more information. The more information we have, the better our chances to replicate the issue. Replicating the issue internally is key, because that let's us know what the problem is and, in turn, how to fix it (ideally).

Also, I feel it's worth noting that, while it's currently the intended behavior for monsters with the Waller affix to be able to spawn tightly near a character, that doesn't mean the functionality is set in stone forever. We've seen a lot of great feedback from players on the affix (like giving walls HP or purposefully staggering where the walls spawn) that we're definitely reviewing.

For the purpose of troubleshooting, though, it's important for us to identify how the affix is supposed to work right now -- what behavior is intended vs. what isn't -- and make that distinction as clear as possible for you. Even if you disagree with how the affix is designed, we still want to be able to fix the bug, and understanding what you're experiencing (normal mechanics vs. bug) is a key part of that.
Hello,

I posted about this as well. I find it odd you guys cant replicate it , because it happens quite frequently, all things considered.

Also, when i posted, i posted that it didnt happen to me this time, but instead, i watched a champ pack do it to one of their own kind. Check my post history, it was bloody pricelessly funny.

Yes, this bug very much exsists, and has many threads around here, as far as i recall reading (unless they got deleted).

We absolutely believe that the reports players are submitting are genuine (that walls are spawning on top of your characters); we're just having trouble recreating the situations you're reporting. That's why we're reaching out and asking for more information.
Beyond fixing this exact issue with the bug, there may be changes to the entire design of the Waller affix in general, to make it a more interesting game mechanic to handle as a player. While it is unlikely a change would happen in patch 1.0.8, we may see a redesign in one of the Future Patches.
Recent News
Diablo III: Ultimate Evil Edition
The console Diablo III edition includes all of the Reaper of Souls content, and special social features!
PlayStation 3