Diablo IIINewsWrath of the Berserker and Archon to be Changed

Wrath of the Berserker and Archon to be Changed

A new guide for Diablo III patches, and Travis Day on constant WotB and Archon 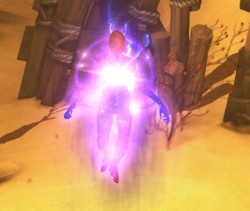 Balancing the skills in Diablo III is a tricky job, and some changes take a while to get just right. Developer Travis Day posted about the long-term goals that the Diablo III developers would like to achieve, for the Barbarian skill Wrath of the Berserker and the Wizard skill Archon. Both of those abilities have a 15 second duration once activated, with a long 2-minute cooldown. But the duration those skills can be extended: the rune Wrath of the Berserker - Thrive on Chaos adds time based on Fury that the Barbarian gains, and a Wizard in Archon form gains an extra 1 second to the duration for every enemy killed. (In the upcoming Patch 1.0.8, Wizards will get that bonus even if someone in their group gets the killing blow.)

This has lead to Barbarians with Wrath of the Berserker up nearly all the time, and Wizards who can stay forever in Archon form. Because of that, the skills more powerful than they were designed to be, and eventually that will be changed. Mr. Day pointed out that the base power of the skills is fine, but that they shouldn't be able to stay activated indefinitely.

Post by Blizzard (Blue Tracker, Official Forum)
I have a love hate relationship with Wrath and Archon for that matter. This is a topic that I felt I should at least comment on since it's come up on many occasions. There is no fundamental flaw with having a 2 minute cooldown ability that transforms your character and is really powerful, the problem is when it becomes a forgone conclusion that these AWESOME abilities are up 100% of the time and instead of being excited that they are up you are annoyed when they fall off. We have talked about what if anything we want to do with these abilities in the long term. I will say we have no short term plans to change them but we don't like that they aren't fulfilling their original purpose which is to provide a really awesome button that mixes up the tempo of combat for a small window of time.
Posted by: Brandon04/19/2013 04:23 PM

Whatever you do, I hope you don't penalize those of us that use it as intended, that is people that just use it for the occasional boost and not a permanent boost.

I want to make this point clear. Wrath is an awesome ability, when the game first launched players used it the way it was designed to be used which was as a huge, temporary, power boost to kill a hard champ or fight a boss. The problem stems from the ability to keep it up 100% of the time. Any future change that we would consider making to either this or Archon would be focused on making these not a 100% uptime abilities. So yes as was stated above Wrath isn't the problem, Thrive on Chaos and the assist duration extending mechanic of Archon are the problems.
If any changes happen to the skills, it will be in a patch down the road, not in patch 1.0.8. The Future Patches guide has the information on everything we're expecting to see in that future patch, most likely named Patch 1.0.9.

We also have a new guide that covers all the patches to date. The new Diablo III Patches overview lists every patch, hotfix, and fastpatch so far to Diablo III. It makes it easy for a returning player to see all the changes at a glance, and hop back in to playing. We'll keep it updated as more patches arrive for the game.
Recent News
Diablo III: Ultimate Evil Edition
The console Diablo III edition includes all of the Reaper of Souls content, and special social features!
PlayStation 3