The Act IV Keywarden will live up to it's name and drop keys, as well as the Infernal Machine recipe 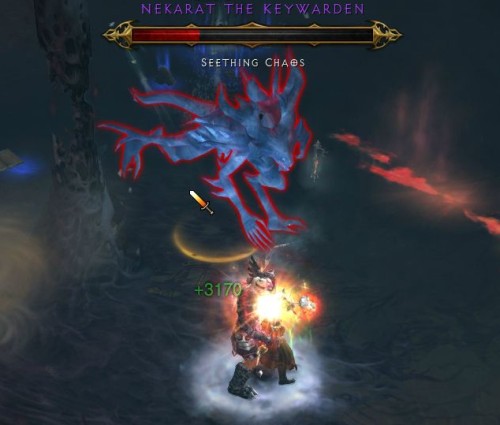 Nekarat the Keywarden is the Keywarden in Act IV of Diablo III, and can drop the recipe for the Infernal Machine, which is used in the lengthy process of obtaining a Hellfire Ring. After the recipe has been obtained, Nekarat has not provided anything else of great value, so he was generally ignored. This is one of the many reasons that Act IV has been the least farmed of all the acts.

That is changing in patch 1.0.8, because Nekarat will now have a chance to randomly drop one of the three keys used for the Infernal Machine portal. Unlike the other keywardens, who can just drop a specific key based on their act, the key that Nekarat drops will be random. It will still not be as consistent for keys as farming in the other acts, but it's a nice change to make Nekarat still useful after a character has the Infernal Machine recipe.

This idea was posted in the PTR Feedback battle.net forum a few days ago, and today developer Wyatt Cheng stopped in to say that it was being implemented right away. This was followed up by Lylirra stating that Nekarat would still be dropping the recipe, too; both the key and the recipe can potentially drop at the same time.

It doesn't impact the drop chance of the plans; it's actually a bonus. :)

(The plans can still drop even if you have them, by the way. The game currently doesn't have a way to check if you have the plans or not. That might be something we work on later, but for now it shouldn't affect you either way -- you can still farm for the plans and/or for the random keys.)

Lylirra also noted in a reddit thread on the topic, that this is why feedback is so important while a patch is up on the PTR. During the PTR development phase, new additions and changes can be made very quickly if the developers think they are good, and they are easy to implement. When someone stated that the developers must have already been working on this, she replied:
Nope. Just a change that was relatively simple to make. :)

(Also, iterating during PTR is much easier than iterating in the live game environment. That's why we highly encourage feedback from players while PTRs are active!)

We look forward to more enjoyable changes like this, as the Diablo III development team continues their work on patch 1.0.8. For more info about everything in patch 1.0.8, see the the Patch 1.0.8 Guide.
Recent News
Hot Topics