Diablo IIINewsDiablo III Console: Not Exclusive to Sony, No RMAH

Diablo III Console: Not Exclusive to Sony, No RMAH

The first day of PAX East brought a wealth of news about Diablo III on the console, as Blizzard started filling in the details that they hadn't covered before. Here's a look at the info that came out so far. This is primarily about the basics of the game, and the single-player version; as noted by Lylirra, Blizzard isn't delving yet into the specifics of the multiplayer aspects.

Read on for all the details from day 1 at PAX!


The longest look at Diablo III on the PS3 so far comes from IGN, who made a 10 minute video of the game being played, while talking to the Blizzard reps at the booth.

The gameplay on the PS3 is paced a little differently than the PC versions, as seen in the video. It is also possible to see the Evade roll that all console characters have, which allows them to move quickly, since the control mechanism is set up very differently than when using a mouse.

Another interesting feature that so far is only seen in the console version, is the appearance of mini-bonuses that last for about 10 seconds. As verified by Vaeflare, there are globes that can drop from creatures, that give a bonus like a shrine for a short period of time. This is in addition to the standard shrines that are still found throughout the game on the console.

Some big news mentioned by Destructoid and the Penny Arcade Report are confirmation that Diablo III on the PS3 can indeed be played offline. This is true for both single-player and multiplayer modes.

Related to that, there won't be a Real-Money Auction House at all in the PS3 Diablo III. That makes sense, as allowing characters to be stored locally, as offline characters must be, isn't secure enough for an Auction House that is connected to real money. There was no discussion so far about the regular Auction House, so we don't know if there are any changes regarding that, or not.

Finally, here's a look at the PS3 control scheme as shown by a large poster at the Blizzard booth, to help players jump right in! 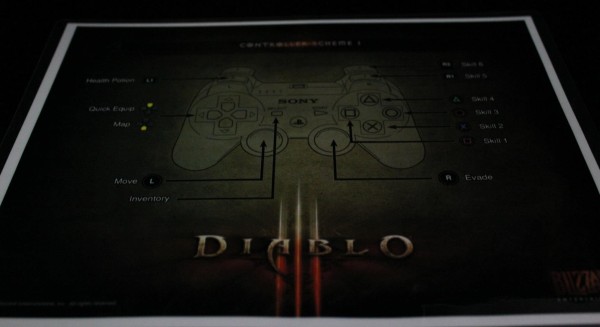 Check back throughout the weekend for more from the PAX East floor, and interviews as they're available, about all the info for Diablo III on the PS3.
Recent News
Diablo III: Ultimate Evil Edition
The console Diablo III edition includes all of the Reaper of Souls content, and special social features!
PlayStation 3