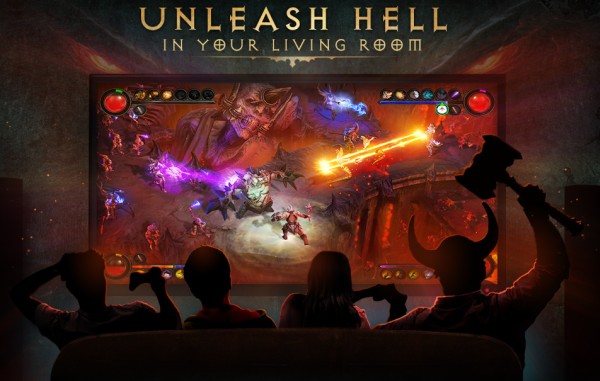 The official Diablo III on consoles website is now live, as Blizzard goes all out to promote the game coming to the PS3. It focuses specifically on the PlayStation 3, with no mention so far of the PlayStation 4 or any other consoles. A number of new gameplay pictures are on display, as well as the stylized multiplayer gameplay image shown above.

Read on to see all the new pictures, and three new Diablo III console videos.


The new PS3 Diablo III pictures show more of the user interface, and Diablo III characters fighting throughout Sanctuary. It is interesting to note that the PS3 Diablo III user interface has changed somewhat just across the pictures provided so far by Blizzard. Some of the original pictures, all listed in our Diablo III on the PlayStation 3 and PlayStation 4 guide, use the big orb to show a character's resources, and the horizontal bar represents the Life left. All the recent images shown here, and in the videos below, the red orb shows Life like it does in the PC version, and the horizontal bar now shows the resources available.

Three videos were released, as seen on the Diablo III videos media page: Check out the new videos and pictures to see how Diablo III looks so far on the PS3. We'll be covering more of that throughout the weekend, with details from the PAX East floor!
Recent News
Diablo III: Ultimate Evil Edition
The console Diablo III edition includes all of the Reaper of Souls content, and special social features!
PlayStation 3