Blizzard Blue posts include an unexpected visit by Wyatt Cheng 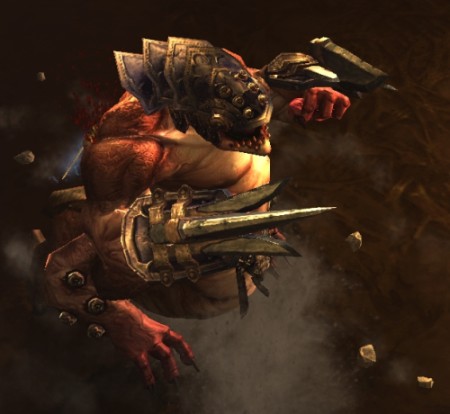 Now that Patch 1.0.7 has been out for over a week and the major bugs were squashed with a quick hotfix, some of the smaller issues are getting ready to be fixed. Wyatt Chang, the Senior Technical Game Designer for Diablo III, stopped by the battle.net forums to give some good news about a fix coming to the Siegebreaker boss next Tuesday.

Read on for the details, and other recent blue posts.

Siegebreaker Reflected Damage
The issue with Siegebreaker goes back to a change in patch 1.0.7: there was a fix for elites with Reflects Damage, so that the damage done by pets like Sentry or more active pets, would no longer reflect back to the hero. Since Siegebreaker had a different type of reflect damage built in, instead of an extra effect like elites and bosses, pets could still kill their masters by the damage reflected.

Wyatt Cheng made his first post on the battle.net Diablo III forums, to state that this will be fixed in the next hotfix, which should be showing up next Tuesday, February 25.
Post by Blizzard (Blue Tracker, Official Forum)
Posted by: Myon02/21/2013 04:09 PM

but if I'm not wrong there's still a bug where uber Siegebreaker still causes Sentry damage to reflect back to you.

Yeah, I saw this happening when I was playing last night as well. Sentries (and other pets for that matter) reflecting damage back to you on Siegebreaker is a bug and is already fixed internally. The hotfix didn't make the last (Feb 19th) maintenance and is currently scheduled for next Tuesday.
Hopefully we'll see more of Mr. Cheng on the forums, giving out the sort of direct responses he has been known for from previous community chats. His avatar on the forums is hypnotically fun to watch, too!

Broken Achievements
Another issue still around in patch 1.0.7 are achievements that aren't working properly. It looks like some of those will be fixed in this next hotfix, or if necessary another upcoming hotfix.
Post by Blizzard (Blue Tracker, Official Forum)
Congrats on your achievement gathering Origin, Insect, and everyone who has strived for the glory of each and every challenge Sanctuary has to offer! It takes quite a lot of dedication to earn so many prestigious Diablo III achievements. :)

In terms of ”broken” achievements, I wanted to assure you that we are actively investigating those little buggers, and we’re hoping to hotfix a number of broken achievements just as soon as we can. Until then, keep up the fantastic work!

Stats on Crafted Rare Items
Everyone is looking at the new crafted Rare items from patch 1.0.7, and thinking about if they're worth making as an item upgrade. A recent post by Vaeflare talked about what sort of stats can show up on those Rare crafted items, and why legendary items (like the ones in our Most Popular Legendaries charts) can be so powerful.
Post by Blizzard (Blue Tracker, Official Forum)
Every item slot has stats that can roll in that item slot, and only Legendary items are allowed to break those rules. That’s part of what makes that item “Legendary.” In this particular case, crafted Razorspikes and other Rare quality bracers cannot form with attack speed, but the Lacuni Prowlers can because that’s part of what’s “Legendary’ about them; Lacuni Prowlers can break that specific rule.

More Crafted Archon Items?
From another discussion about the crafted Rare recipes, it sounds as though the developers are happy with the way the new armor and amulets are working, but there aren't any other such recipes in the works, for now.
Post by Blizzard (Blue Tracker, Official Forum)
We’re pretty happy with the way the Archon recipes have turned out, but we’re just keeping an eye on things for now. That said, while we don’t have any plans at this time to add additional BoA items or crafting recipes, we think they can be meaningful addition to the game (if done right) and certainly aren’t opposed to doing more in the future. We’re glad to hear they’ve made your time in Sanctuary more enjoyable. :)

On a personal note I’m also very happy with the Archon recipes, since I like looking for a variety of raw materials, recipes, and items while slaying demons.

Legendaries in Resplendent Chests
It sure doesn't happen much, but it was verified that legendary items can indeed drop from Resplendent chests.
Post by Blizzard (Blue Tracker, Official Forum)
Though I haven't experienced it myself, I've confirmed with developers that it is indeed possible to get a Legendary item from a Resplendent chest. It doesn't mean it's likely, but it's probably a good idea to leave no chest unopened. ;)

Witch Doctor - Sprit Barrage, Mana Issues
Finally, in a discussion on the Witch Doctor forums, Blizzard CM Grimiku talked about a build he likes using, with Spirit Barrage - Well of Souls and Acid Cloud - Acid Rain. He also discussed the ongoing issue that Witch Doctors have with mana, and it's interaction with IAS.
Post by Blizzard (Blue Tracker, Official Forum)
For what it's worth, I use Spirit Barrage - Well of Souls on my Hardcore Witch Doctor (who just killed Diablo in Inferno, yay). I like the fact that it goes over walls, can be quite effective at burning down single targets, and rocks at mopping up damaged monsters after a single cast of Acid Cloud - Acid Rain.
sorry i can't help myself. the cold day in hell thing is hilarious...and i know this will be read sooooo....

um, since you play a witch doctor I am sure you understand that IAS(increased attack speed) is not the best stat for them. and you also must notice that we are the only class that has main attacks that use up our resource instead of generating it like every other class(wiz is free), barb on hit and when hit, dh on attack, monk on hit.

and the more IAS we stack the faster we run out of mana. do you guys plan to fix this? like, how come my monk attacks faster and replenishes spirit faster, without having to worry about losing spirit from attacking too fast but my witch doctor I have to throttle all the time. we are the only class where it is a glaring issue. has anyone on your side noticed? is this intended?
sorry, i couldn't make it to ask the developers because im an adult and i have a job. but this golden opportunity i am not going to waste. thanks for your time

We’re aware of the unique resource challenge that Witch Doctors face, and how that can affect the desire for IAS. I would say that IAS is still valuable for Witch Doctors, but that value scales heavily with effective resource management, and that’s intentional.
Recent News
Diablo III: Ultimate Evil Edition
The console Diablo III edition includes all of the Reaper of Souls content, and special social features!
PlayStation 3