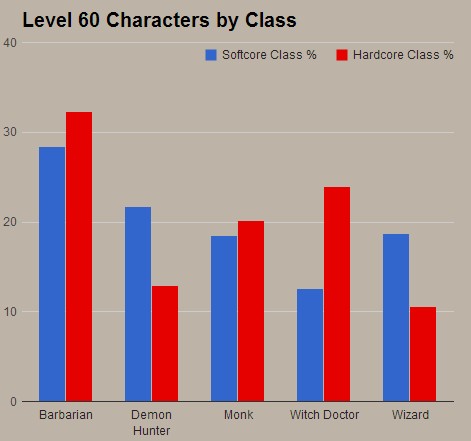 Our daily scans of Diablo III characters recently passed 1.5 million. In celebration, we've gone through and dramatically updated two sections with interactive charts of a ton of data: the Hardcore Deaths section, and the Class Popularity set of charts.

Click through to read some interesting tidbits from the new and improved charts!


Hardcore Deaths
The Hardcore Deaths section delves into all the data of when hardcore characters bite the dust.
The numbers listed here are a snapshot of the current data, but the charts are updated every day with fresh results, as we scan over 1,500,000 characters to gather more data.

See the Popular Builds and Skills overview for information on how we gather the data, and adding your account to our database! Check back regularly for more info, and feel free to Contact us if you have any suggestions on other interesting charts to make.
Recent News
Diablo III: Ultimate Evil Edition
The console Diablo III edition includes all of the Reaper of Souls content, and special social features!
PlayStation 3