Explanation of why the new ring in patch 1.0.5 no longer does millions of damage 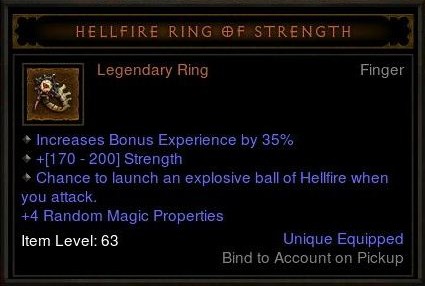 Patch 1.0.5 for Diablo III is adding two new systems, the Infernal Machine and the Monster Power system. Players will need to use both of those to collect all the pieces to make a Hellfire Ring. This is an Account Bound ring that can be obtained after much effort. It has a special attack of a fireball that does damage for you. When the ring was first introduced on the PTR, that proc did millions of damage for highly geared characters; you can see it in action in this video.

The latest PTR patch dramatically reduced the damage done, in a nerf that took it from base damage around 800k before critical attacks, down to a flat damage amount around 25k. There was much discussion about this change, since many people were expecting the ring to go live doing millions of damage.

A recent blue post details why the fix was done, and how it was a bug that the ring could do that much damage in the first place.

Post by Blizzard (Blue Tracker, Official Forum)
It was actually a bug fix. The ring's proc damage was incorrectly scaling with a player's primary stats and weapon damage, which it was never designed to do. While we agree it was pretty sweet to see your characters do millions of damage in a single hit, no other Legendary procs scale this way -- and that's intended.

The Hellfire Ring will still be valuable, though. It may not be as valuable to players who have reached Paragon 100 now that it doesn't deal buttloads of damage when it procs, but it will still be competitive. Given the nature of how the ring is crafted, it has the opportunity to roll with some pretty incredible stats, so one of the rings you create may be BiS for you. Then again, it may not, but that's a good reason to keep farming (if that's your thing).

As for players who are leveling Paragon, we're okay with Hellfire being BiS. Yes, it will help you level up faster, but even if you stack it with Leoric's Signet and a ruby gem in your helm, reaching 100 will still take a very long time. And, as you've illustrated, the ring probably won't be a "must-have" forever, at least not for everyone depending on the stats you roll.

This is the first Diablo III patch on a PTR, so many people are still learning how the process works. It's a safe bet that with any new addition on the PTR, if something seems "too good to be true", it probably is. In a game like Diablo III that is all about random drops, the absolute best items will never be ones that can be assembled or crafted. The Hellfire Ring is a powerful item that will help most players, especially since without a level requirement it can be used by all characters on an account. But there will be some other rings that are more powerful, for the small percentage of players who reach Paragon Level 100 and don't need the experience bonus any longer.
Recent News
Hot Topics