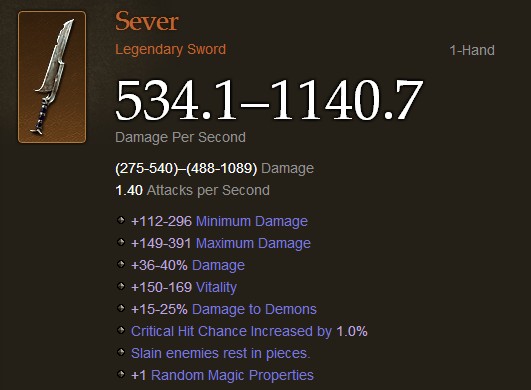 Along with the many new features coming in Diablo III patch 1.0.5, there will be changes and fixes. The legendary sword Sever was being looked at, to possibly be changed in the upcoming patch.

Sever has a unique buff, listed as Slain enemies rest in pieces. This activates upon a killing blow; when a monster is killed with the sword equipped, the damage done to the monster is multiplied 10 times. Since the creature would have died anyway, it doesn't make a difference in killing speed, but it does give nice huge numbers upon kill. The power of the sword comes when it is used with Life Steal, where a percentage of that massive damage is converted into life, healing up the hero using the sword. This video covers how it works.

This was seen as a potential bug, and when patch 1.0.5 went up on the PTR, the 1.0.5 Known Issues List had the Rest in Pieces affix listed as a potential issue when used with Life Steal. Because of that, it was expected that the affect on the sword would somehow be nerfed.

A blue post puts that concern to rest, stating that the sword will not be nerfed in patch 1.0.5; heroes with the sword can keep getting those massive kills, and getting healed if they have Life Steal.

Post by Blizzard (Blue Tracker, Official Forum)
I just wanted to jump in really quickly to clarify that we have no current plans to change how the Legendary sword Sever or the Rest in Pieces affix functions. I can assure you there is no nerf, and none were ever announced. We were briefly looking into Sever (which is why it appeared in the Known Issues List), but ultimately decided against making any changes.
Recent News
Hot Topics